May 22, 2012
Last week I reviewed Steve Wiegenstein's Slant of Light, his marvelous pre-Cvil War novel about a commune in Missouri. It was a fascinating book with great characters and writing. I'm thrilled to share my interview with the author; read on to learn more about Wiegenstein's writing, his book, and what he does when he's not writing! 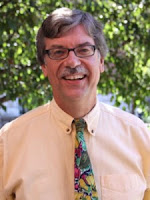 It was an oh-so-ironic, Jack London-esque story about a man who goes out to the woods during the Depression to shoot some game for his starving family. They are so poor that he only has one bullet for his gun, so naturally he trips over a root and shoots himself in the chest just as a big deer enters the clearing where's he's been waiting. Yes, I'm still cringing.

I seem to do my best writing in the early morning hours, so I try to get up early and work in the dark before anyone else is awake. Not to sound too nocturnal about it, but the darkness seems to help me focus and to get into that "other space" where imagination happens.

Was Slant of Light the original title of your book? 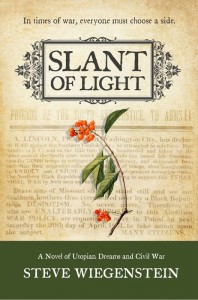 No, my working title was "Daybreak," after the fictional community where the action is set. I thought it was nice and gently symbolic--rising sun, hope, but still with some uncertainty. But then when we did a title search, there turned out to be a bunch of other Daybreaks, so the publishers at Blank Slate Press and I started brainstorming. We worked for weeks on the title! For at least two months I couldn't get title ideas out of my head. But when "Slant of Light" hit the radar, I knew immediately that we had a keeper. I've always loved the Emily Dickinson poem that it's drawn from--it's one of her most mysterious and evocative poems, and it conveys such a sense of something that is both inscrutable and certain at the same time. I think we all know what that certain slant of light feels like, but it's almost impossible to articulate.

As you were writing Slant of Light, was there a particular scene or character that surprised you?

I love to travel--my favorite form of travel is to fly somewhere, rent a car, and then just go. I am also an avid canoer on Missouri's Ozark streams. There is no place I would rather be than floating down the Black River on a summer's day.

Oh my! A bunch of the new releases from Unbridled Books are just fabulous. I would highlight You Believers by Jane Bradley, The Coffins of Little Hope by Timothy Schaffert, and The Lola Quartet by Emily St. John Mandel. I also just finished Morkan's Quarry by Steve Yates, which takes place in roughly the same era as my novel. It's terrific! I highly recommend it for historical fiction fans.

I'm thrilled to offer a copy of Slant of Light to one lucky reader! To enter, fill out this brief form. Open to US/CA readers, ends 6/1.