Equal of the Sun by Anita Amirrezvani 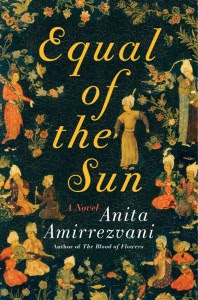 Rating: Liked a great deal.
Did I finish?: Yes -- in a few days.
One-sentence summary: In 16th century Iran, a brilliant princess and her loyal eunuch struggle to survive court intrigue, betrayal, and the possible fall of the empire.
Reading Challenges: Historical Fiction

Do I like the cover?: I do, very much: the embroidery and patterns of the character's clothing is often described and I love that the book cover resembles one of the royal robes.

First line: I swear to you on the holy Qur'an there has never been another woman like Pari Khan Khanoom.

Did... I want this book to be never-ending?: YES. Pari was a fascinating woman and I wished her story never had to end!

Did... I wish there was a glossary?: YES. Amirrezvani uses what I presume are Farsi terms peppered through the story; it definitely adds flavor and I think I understood the gist of many of the phrases, but I would have loved a glossary.

Why did I get this book?: I love fiction set in the Middle East.

Review: Set in 16th century Iran, this rich and detailed historical novel follows Javaher, a eunuch who becomes confidante, spy, and vizier for the Shah's brilliant, passionate, and greatly underutilized daughter, Princess Pari Khan Khanoom. As the novel opens, Javaher has just joined Pari's household, and as the Shah's favorite daughter, both Pari and Javaher have enormous access to the Shah's household staff, the courtiers, and the other nobles. For Pari, this allows her to better understand the factions worming for power; for Javaher, it is an opportunity to research the man who caused his father to be branded a traitor, leading to his execution. Everything changes, however, when the Shah dies unexpectedly without naming an heir, and Javaher and Pari are no longer in power, but find themselves in a precarious place at the edge of court.

There's a bit a culture shock at the start of the novel -- names, places, dynasties, factions all thrown at the reader with a minimum of context -- but by the third chapter, I understood the general gist of who to like and who to dislike, and I raced through this book. Amirrezvani's strength lies in her dialogue, her ability to convey character and morals in someone's appearance, behavior, or manner. Longer descriptive scenes, like battle or sex, felt a bit obfuscated and muddled. Court intrigue is here in spades, enough to rival the most sordid Tudor historical novel, and I think fans of Tudor fic will actually really enjoy this one (Elizabeth, reigning monarch of England at this time, is mentioned!). Javaher's life as a eunuch (and his life before becoming one) is explored as well, and it is horrifying and fascinating.

Despite the heftiness of this book (340ish pages), I really did race through it in about two days -- I loved Pari and I wanted to remain with her for a long time. As with the best historical novels, I teared up at the end and I closed the book feeling as if I had to leave a friend. Best feeling ever.

I'm thrilled to offer one reader a copy of Equal of the Sun! To enter, fill out this brief form. Open to US/Canadian readers, ends 6/22.