- June 06, 2012
I was absolutely taken with Carolina De Robertis' novel Perla, about a young woman's battle with the ghosts of her family's past, and I'm thrilled to share this interview with her.  Read on to learn more about her writing, her book, and what she does when she's not writing.  Be sure to enter the giveaway at the end!

I’ve never actually told this in public, you’re the first to get it out of me! The first story I ever wrote was called “Spimp, the little Kirmie.” It was about, well, a Kirmie—an extraterrestrial creature that looks something like a bunny, a bear, and a racoon rolled into one—who is sent to earth to study the way humans live, and discovers that we are in fact stranger than previously imagined. It comes complete with illustrations, and is twelve pages long. I was seven years old. I didn’t write it for school but for the sheer adventure of it. It has never been published.

I don’t adhere too strictly to any particular routines, as it’s important for me to remember that writing can happen anytime, anywhere, and that the gates are always open. I don’t want to become too dependent on anything, because, in a life full of noise and responsibilities, it’s important to stay limber and flexible. That said, I know that I write best when I have long swaths of time in which to sink into the work, rather than many smaller nuggets of interrupted time. I strive to write first, leaving the seductive (and powerful) chatter of the internet for later in the day. I do not answer the phone. I take walks to mull particular questions, to get unstuck, or to “feed the well” by tuning into what the light is doing, how it lands on leaves and sparks in gutters. And I dip back into books that have blown my mind in the past, with the hopes that they might jostle open ideas or push my own prose to a higher level. 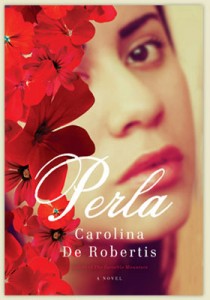 Was Perla the original title of your book?

No! The book went through many, many titles in the course of writing it, and Perla didn’t stick until the very end, when all the rest of the writing and revision was done. My editor and I went through a long process of pitching titles to each other and exploring a myriad possibilities. And then we came together around a simple, direct title: Perla. And it is right. Because this young woman’s name—where it came from, what it means for her to carry it—holds so many secret keys to this book.

As you were writing Perla, was there a particular scene or character that surprised you?

I knew some things about where the narrative was headed, but there were aspects of the ending that remained nebulous to me until I was finally ready to write it. The details of what happens on a certain final night (I’m being vague to avoid spoilers, but hopefully those who’ve read the book will know what I mean), actions that Perla takes—those were unexpected, and they startled me and even moved me with the meaning they carried under the surface. In the process of writing that scene, I came to see understand Perla in a new way, her strength and pain and immutable inner wildness.

I love reading (big surprise!), going for walks, cooking meals together with my wife, and playing with my infinitely exuberant three-year-old son—from kicking a ball around to pretending to be sharks or reading ¿Cómo van a la escuela los dinosaurios? for the hundredth time and still laughing at the jokes. At the moment, I’m also eight months pregnant, so I have to say, I’m really enjoying rare precious moments with my feet up, staring at the wall.

No doubt! I just read, and absolutely loved, The Lady Matador’s Hotel, by Cristina García. It’s beautifully written, and such a delicate and engrossing example of polyphonic writing—a story woven from many points of view, in this case exploring the intrigues of a luxury hotel in war-torn Central America.

On my nightstand right now: Ovid’s Metamorphoses, and, as part of research for my third novel, the 500-page memoirs of Francisco Canaro. He was an Old Guard tango musician who lived the history of tango music from its earliest, grittiest days to the golden era. Not only has this book never been translated into English, but it’s out of print even in Argentina. It took me almost a year to get my hands on a copy. It was worth all the effort. To my surprise, it’s a riveting read, and filling me with images and ideas for my next book.

I'm thrilled to offer a copy of Perla to one lucky reader! To enter, fill out this brief form. Open to US/Canadian readers, ends 6/8.
* giveaways * interviews