All He Saw Was The Girl by Peter Leonard 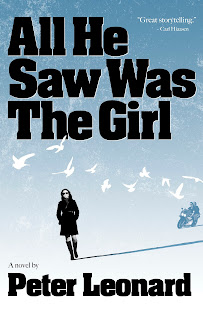 Title: All He Saw Was The Girl
Author: Peter Leonard

Rating: Liked a good deal.
Did I finish?: I did.
One-sentence summary: Five Americans, one Roman crime syndicate, and a barrage of crimes.
Reading Challenges: A to Z, E-books

Do I like the cover?: Love it! It represents THE scene where the line 'All he saw was the girl...' is used and it has that sharp, sparse, sexy look of a fabulous crime thriller.

First line: McCabe watched Chip offer the long-haired guy a cigarette, the guy surprising him, taking the pack of Marlboros out of Chip's hand.

Buy, Borrow, or Avoid?: Borrow or buy -- this is a fluffy beach crime caper, brisk and entertaining, effortless and engaging.

Why did I get this book?: I was super curious to see how Elmore Leonard's son wrote!

Review: This was an unexpected hit for me. After a slow start -- in which I kept picking up and putting this one down -- around page 80 I suddenly got sucked in, and I found Leonard wasn't doing a standard double cross crime tale.

Initially confusing -- there's about three story lines that eventually come together -- I got hooked by Leonard's breezy writing style and slightly sarcastic style. Quip-y action flick, all popcorn and soda, this was a perfect beach read.

Charles 'Chip' Tallenger III, spoiled son of a US senator, and his roommate William McCabe, scholarship student from Detroit, are doing a semester abroad in Rome. When Chip steals a taxi and crashes it, he and McCabe are arrested and bailed out by Chip's father. Local newspapers misidentify them in a photograph, and low-level Mafia thugs decide to kidnap who they believe to be the senator's son for some quick cash. Back in Detroit, Sharon Vanelli, married to a Secret Service agent, starts an affair with 'Swingin' Joey Palermo, a Mafia thug who, needless to say, is stunned when he discovers Sharon's federal connections. These twists occur early on in the book and I thought I knew where the story was headed, but Leonard pleasantly surprised me. There's some double crossing, and poor life choice decision making, some thrilling chases and shudder-inducing fight scenes. Throughout it all is a kind of sardonic humor, no one quite black-and-white, but amusingly gray, and once the story clicked for me, I found myself racing through this one.

And oh, the ending. It's so ludicrous and odd, but darkly hilarious, and I ate it up. A super satisfying, sugar-buzz of a read.
* book reviews book rating - liked