Flight From Berlin by David John 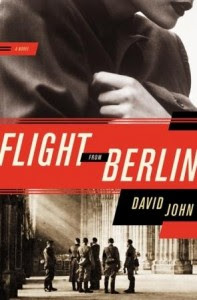 Rating: Okay.
Did I finish?: I did -- I breezed through this one.
One-sentence summary: An American party girl turned journalist and a British journalist turned possible spy meet in 1936 Berlin.
Reading Challenges: Historical Fiction

Do I like the cover?: I do -- I'm rather fond of these split picture style covers and it feels like they're becoming increasingly common for a certain type of hist fic. If I had my way, some images from the 1936 photos would be featured on the cover...

I'm reminded of...: In the Garden of Beasts, Lauren Belfer

First line: He landed hands first on the wet, sandy soil and rolled over on his side.

Did... I love John's author note about this novel being inspired by what can be found in footnotes?: YES. I adore footnotes -- such a treasure trove of maddening tidbits!

Did... I deeply appreciate the inclusion of 'Notes on the Characters'?: YES. John explains who is fictional, who is historical, and what they really did or didn't do -- fascinating stuff.

Buy, Borrow, or Avoid?: Borrow if you want a light hist fic that offers a slightly new angle to WWII novels.

Why did I get this book?: I'm an Olympics fangirl.

Review: If wishes were horses, beggars would ride for free, says my wife when I'm sighing about something, and she lobbed this one at me recently when I started sighing about this book. I went something like, 'I wish this book would...' -- which unfortunately is a feeling that stayed with me the entire time I was reading.

In this Olympic season, John's novel is particularly timely and I was pretty eager to start it. I'm fascinated by the 1936 Olympics and the pageantry, lies, and horrors involved, and so I was disappointed to discover that the novel's focus shifts fairly quickly away from the Olympics once our heroine is booted from the US Team due to wild behavior on the trip to Germany.

In brief, this novel follows Eleanor Emerson, socialite, wife of a jazz musician, and Olympic athlete, who takes up journalism after her aforementioned antics cause her to be kicked off the US Olympic Team. At the same time, British journalist Richard Denham struggles with his conscience and work contract when it comes to covering the 1936 Berlin Olympics. The two meet, fall for each other, get snarled in a conspiracy involving a top secret dossier about Hitler, and end up on the Hindenberg.

This isn't a bad novel, don't get me wrong, it just wasn't what I wanted it to be, and since I had some knowledge of what John featured in this novel, the story and plot and historical shading just felt too topical. For someone who is unfamiliar with this facet of Nazi Germany, I think this novel will be very gasp-inducing ('That didn't really happen, did it?!', etc.). The writing is nice, straight-forward, not overly detailed (at times, a little too tell-not-show for my tastes, actually), and the cast is manageable. A fast read with enough historical weight to keep it from being too fluffy. John's inclusion of resources he used provided me with a longer TBR as I wanted to get into the meaty details that inspired him.

I'm thrilled to offer a copy of Flight From Berlin to one lucky reader! To enter, fill out this brief form. Open to US/Canadian readers, ends 8/3.