House of Shadows by Rachel Neumeier 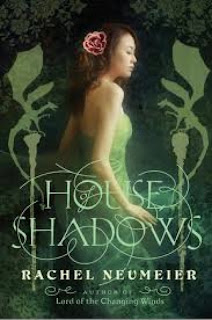 Do I like the cover?: I don't have any strong feelings one way or the other -- it's pretty enough but doesn't jump at me.

First line: In a city of grey stone and mist, between the steep rain-swept mountains and the sea, there lived a merchant with his eight daughters.

Buy, Borrow, or Avoid?: Borrow if you like battle-y fiction that has an emphasis on characters, if you like unique settings, and strong women.

Why did I get this book?: Every now and then, I like a fantasy novel, and I do love stories of orphans having to survive -- what does that say about me?

Review: Despite the novel's sort of sing-song, fairy tale opening -- In a city of grey stone and mist, between the steep rain-swept mountains and the sea, there lived a merchant with his eight daughters. -- the book settles quickly into a focused fantasy novel, following two of the eight orphaned daughters.

Now poverty stricken, the mathematically-inclined sister discovers that despite the family's holdings, they are utterly destitute. Briefly -- again, in that same sort of dreamy, fairy-tale manner, it comes clear that sisters must be sold for the family to survive. Pretty, docile Karah becomes a 'keiso', a geisha-like courtesan, while Nemienne becomes a mage.  Their income is sent to support their remaining sisters, and their careers choices thrust them into the center of turmoil they would otherwise have missed.

I enjoyed this set up, and the rush to get Karah and Nemienne to their respective new homes. Once they were settled, the story's vibe changes from that fairy-tale style to detailed fantasy, which disappointed me but didn't turn me off from the novel.

The world-building in this novel was lovely enough, vaguely Asiatic despite the kind of faux-Celtic names.  However, it felt a bit uneven, right from the start.  Neumeier invents 'keiso' for her caste of prostitutes, but doesn't invent other jobs (for example, mages are mages, not some new word for magician). Perhaps Neumeier was worried that all the words for courtesans was too loaded but her articulation of keiso culture and keiso life felt familiar, from Cloisonné House in the candlelight district, to the social mores of a keiso's relationship with her lover, and I don't know if it added to the story so much as remind me that the world-building felt patchy.  (Now that I think of it, Karah as a character was rather flat, too -- super pretty, super innocent [of course!], super trusting -- so perhaps that whole arc could use some polishing.)

However, Neumeier includes those details I so adored in fiction as a kid -- rich descriptions of food and meals, wonderfully rendered passages on clothing, or landscape, or a room's set up -- and I greatly enjoyed being immersed in this world.  When a character clicked, he or she literally roared to life. I greatly enjoyed Nemienne and Leilis (serving girl of sorts at the keiso house), to the point I wished the book would stop shifting to feature someone else.  The various threads of this book differ in quality but I found the characters compelling -- especially these two strong, interesting women -- that I didn't want to stop reading.

Neumeier has many other books under her belt but as this is a standalone (I think many of her books are part of a series or two), I think this might be a good introduction to her. Those who like place as character (even if that place is very imaginary) will like this one, as well as those who enjoy battle as a backdrop and the tension of conflicting loyalties.

I'm thrilled to offer a copy of House of Shadows to one lucky reader! To enter, fill out this brief form. Open to US/Canadian readers; ends 8/17.
* book reviews * giveaways book rating - liked