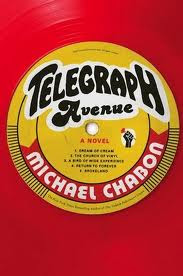 My second of four updates of the Michael Chabon Telegraph Avenue Readalong, sponsored by Emily at As The Crowe Flies (and Reads!). Every Tuesday (roughly) for the next three weeks I'll be sharing my thoughts on the book so be sure to pop by.

This week I'm going to be discussing my general thoughts of Part Two as well as further thoughts on Part One.  I'll be sure to label spoilers.  Sorry again for the novel-length post!

Obviously, I'm a bit behind -- the update was to be posted on Tuesday but I just wasn't finished enough to get my thoughts in order, so I'm doing it today.  I'm glad for the extra time -- after feeling so very prickly toward Telegraph Avenue last week, I did a virtually Google-free read of Parts One and Two, and I'm a lot happier this week than last week.

Reading; or Giving Up Google

It made for a nicer read! I started treating this the way I do a fantasy novel with weird names for mythologies I'm unfamiliar with, and just skimmed over musical references, and as with fantasy novels, I eventually stopped feeling so 'stuck' in the story, and moved along with it.  Not stopping every few pages did, however, make me realize I'm actually kind of exhausted by Chabon's writing style.

While last week I was pretty smitten with Chabon's bouncing, rhythmic, decadent, excessive, jazzy prose, this week I'm less enamored of it. I'll be honest: I'm even a little tired of it. I will even go so far to say it feels forced, as if Chabon is throwing in odd comparisons and weird alliterative obstacles because he feels like he ought to and not because the story needs it.  (And sometimes, the story doesn't need it.  Sometimes, the story cries out for a little less riffing!)

One of the things that struck me as I reread Part One and worked through Part Two is the juxtaposition of the aspirations of the characters versus their reality. For all their radicalism -- in their youth and even currently -- many of them embody very traditional realities, although with varying degrees of success. I find I feel bad for most of the characters -- in one way or another, they're being failed -- and what has most struck me with this read is the idea of parenthood/fatherhood.  Obviously, we see it most vibrantly with Archy Stallings and his absentee father, Luther Stallings, as well as his non-relationship with his unborn child and Titus, and his mock relationship with the borrowed baby.  Even Nat struggles to connect with his son.

On Being a 'Bad' Mother

I definitely rolled my eyes when Gwen started berating herself for being a 'bad mommy' (this is from Part One); while it might have been a genuinely in character response, given that Chabon's wife has penned the (in)famous original Bad Mommy handbook, it seemed a bit to much like a kiss-up-y nod, proving how sensitive he is.  I scoffed.

I personally am really challenged by flawed characters in novels that aren't meant to be dark or super morally ambiguous. In a book like this -- not, say, a gritty noir or grim black comedy -- complicated characters frustrate me. Archy isn't bad -- he might be a bit amoral, perhaps -- but he really only owes his wife an answer and an explanation. Yet I take his behavior super personal -- 'how can I like this man when he treats his wife this way?!' -- and it's hard for me to shake off the judging and allow the story to unfold.  That I like Gwen makes me more sanctimonious, I'm sad to admit.

As a rule, in my historical fiction, I don't mind cameos, although I can't say why. I suppose they usually occur during an era I'm unfamiliar with, or don't have emotional connections with, or feel far enough away that I've got distance from the figure. Obama's appearance in this book? I cringed. It was just a little too Forrest Gump-y for my tastes. There's something so twee and self-conscious about the insertion of a currently living celebrity, and to insert Obama? Feels like cheap shorthand. Is this a post-racial Oakland? Let's thrown in the post-racial presidency.

I'm having a much happier reading experience this week and I'm pretty excited to do my roundup for Part Three. I don't know if this will be a 'love' but despite my earlier grouchiness, I'm liking the book.
readalong