My Dear I Wanted To Tell You by Louisa Young 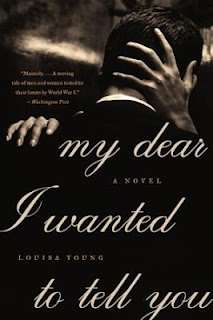 Title: My Dear I Wanted To Tell You
Author: Louisa Young

Rating: Loooooooooooooooved.
Did I finish?: I didn't want to finish because then the book would be over!
One-sentence summary: World War I in all its unvarnished glory, seen through the eyes of five people, connected by love and violence.
Reading Challenges: Historical Fiction

Do I like the cover?: I do -- it captures some of the class/romance themes in this story although I think I prefer the hardcover version.

First line: It had been a warm night.

Why did I get this book?: War and women, I can't resist.

Review: Excuse me, I need to wipe away tears so I can type. And some drool, because the writing in this book had me open-mouthed with awe/horror/amazement/delight. And then some.

This book has it all: pathos, romance, angst -- Kierkegaard-ian angst! -- anger, joy, beauty, and an articulation of war that is cinematic and breathtaking and disturbing.

Set in the years before World War I, and during, the story follows five people -- a couple in love, forbidden due to class differences; a married couple deeply in love, separated by the impacts of war; and a nurse with a medical facility revolutionizing facial reconstruction surgery.

Young's take on World War I reminded me very much of Saving Private Ryan's infamous opening -- impossible to ignore, mesmerising, unforgettable, and disturbing. The two relationships featured are predictable in some ways -- a couple facing class differences and parental disapproval find wartime changes society enough to allow them to attempt a courtship (long distance, of course) while another couple, formerly happily married, finds war changes them to the point of being unrecognizable. For me, the hook of the story wasn't so much the will they/won't they but the need to see if anyone would find a measure of happiness in the end.

I think this is what I wanted Atonement to be, or at least, this is how I wanted to feel when I finished Atonement. I'm awestruck, and gobsmacked, and I'm churning through the mental images painted by Young.

I've read some reviews that criticized Young's writing style but for me, it was one of the draws. I loved it, from the first page: some stream-of-consciousness (which harkened to the Modernist writers), some elegantly obtuse passages (imitating the layers of decorum and etiquette some of the characters are forced to embody), boldly graphic scenes that literally conveyed the violence of war ... This was the kind of book that makes me yearn to be a writer and despair I'll ever be one!

Should I keep gushing?

I'm thrilled to offer a copy of My Dear I Wanted To Tell You to one lucky reader! To enter, fill out this brief form. Open to US/Canadian readers, ends 7/20.
* book reviews * giveaways book rating - loved