The Magician's Assistant by Ann Patchett 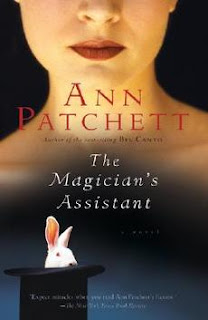 Rating: Meh -- okay.
Did I finish?: I did, with considerable effort.
One-sentence summary: A new widow traces her husband's mysterious past and learns more about love, family, and belonging.

I'm reminded of...: Ann Patchett (is that unfair to say?)

Buy, Borrow, or Avoid?: Borrow, but then again, I'm biased.

Why did I get this book?: Favorite blogger Nomadreader mentioned she wanted to read more Patchett and kindly agreed to do a joint read with me. You can read her take here.

Review: This is my second Patchett novel, and I liked it even less than the previous one I read (State of Wonder).

First, I totally misunderstood the premise of this novel. I thought our heroine Sabine's lovely hottie magician husband dies, and then she discovers he was secretly gay, and then discovers he lied about his family being dead and seeks them out blah blah. Instead, the story is that Sabine's lovely hottie magician husband is openly gay and only marries her in the last year so she may inherit his things. He's had numerous loves despite her affection for him. When he dies, she discovers his family isn't dead and seeks them out blah blah. Slight difference, but a significant one: it put the idea of knowing more on Sabine. She knew who Parsifal was, to a point -- she'd been his assistant for 20 years -- so I found her behavior in this book to be a bit piteous and aggravating.

Disappointingly, rather than explore the source of her mental and emotional stasis, Patchett has Sabine pursue Parsifal's life -- yet another obsessive step into the life of a man who didn't love her like she loved him. Since I wasn't fixated on Parsifal the way Sabine was, this whole journey didn't capture me. That Sabine seemed to have little emotional growth and development along the way -- other than to glom onto one of Parsifal's relatives -- frustrated me, but I'm not sure that was the intent of Patchett's story. I think we were supposed to like and relate to Sabine but I found her in need of therapy and some time alone to think about who she is and what she wants from her life.

My next complaint is a little harder to articulate, but there was something dated, I guess, about the novel's feel regarding gays. In some ways, that makes sense -- this book came out in 1997, nearly twenty years ago -- but at the same time, I feel like there's an artificial sense of shock and surprise created by Patchett to evoke tension, maybe. I'll have to meditate on this more as I know I'm not expressing myself clearly -- while reading this, I found myself venting to my wife about how all the Midwestern gays I know (even the ones not speaking to their families) had a more layered relationship to their kin than Patchett's imagining.

And on to my final complaint about this book: I wasn't wild about Patchett's use of setting. In State of Wonder, I thought she evoked the Amazon beautifully, magically. In this book, I found her articulation of Nebraska and the Midwest to be little more than caricature. I suppose since I've lived in Nebraska and the Midwest for a good chunk of my life (and not the Amazon), I cared more, but I felt Patchett used stereotypical shorthand to paint the setting -- country kitsch decor, Walmart, brutish spouses -- rather than really evoke the beauty of a place that moves, lives, and breathes differently than L.A.

The writing is very Patchett-ian, I would say. I read a review about this book describing it's "...dreams, flashbacks, and long, elliptical conversations..." which is spot on, and made me insane. I'm not wild about dream sequences in books; I find them a bit self-indulgent and pointless. Perhaps if I liked Sabine more, that element would have resonated, but since I didn't, I felt tired -- I kept putting this one down rather than wallow in the linguistic snakiness.

So, in conclusion, I'm a big cranky wench. Millions of others have enjoyed this novel so I'm sure it's mostly just me.
* book reviews book rating - okay