Thieftaker by D. B. Jackson 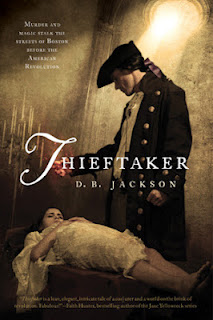 Rating: Liked.
Did I finish?: I did!
One-sentence summary: Amidst troubles in 18th century Boston, a magician finds himself tangled in a complicated plot involving dissension, blue blooded families, magic, and other treachery.
Reading Challenges: E-books, Historical Fiction, NetGalley

Do I like the cover?: I do -- it references a key scene from the beginning of the novel, and has a lovely articulation of the historical/fantasy element.

First line: Ethan Kaille eased his knife from the leather sheath on his belt as he approached Griffin's Wharf, the words of a warding spell on his lips.

Did... I kind of hate the weird fantasy-ish names the characters had?: YES. Some folks have rather mundane, Colonial-era names while others just felt like they were straight out of a fantasy novel, which kind of bugged me.

Did... I fall over in surprise when I learned theiftakers were historically real?: YES! The author has a huge historical section on his website, chock full of fascinating tidbits and details. (And check out the freebies section, which offers the first three chapters of this book as well as the sequel, and other goodies!)

Buy, Borrow, or Avoid?: Borrow if you like urban fantasy or light magical-y novels that aren't fluffy.

Why did I get this book?: Colonial America + magic. What else is there to say?

Review: I'm not very good at suspension of disbelief. I don't like having to feel my way through a story; I much prefer standing on both feet when I dive into a book. As a result, I tend to shy away from fantasy and hardcore scifi, because I'm kind of a tech/fantasy dummy and, like I said, I'm impatient with learning a new world.

However, I am really a big fan of novels set during the US Colonial era, especially those in Boston, so I really was seduced by the idea of this book from the get go. Having enjoyed some speculative novels that mix history and fantasy -- Stephanie Dray's Cleopatra Selene series, for example, as well as Elizabeth Bear's New Amsterdam -- I was sure this one would be a huge winner for me.

Ultimately, I would describe this as an urban murder mystery, with a vaguely historical setting and some magic around the edges. The tropes of a standard PI series are here: world-wearied, wounded man, a bit scruffy around the edges but with a steely conscience; a young, dopey, but devoted side kick; a hot piece on the side who offers food, sex, and nursing skills; an aloof old flame; a foxy femme fatale crime lord and her thug-y henchmen; unhelpful law enforcement.  Ethan Kaille, our hero, is a theiftaker -- someone who catches thieves -- as well as a magician; he is hired to recover a brooch stolen from a murdered woman. An unusual case for Ethan, who normally moves among the lower class, this mystery provokes interest in him from all angles: other criminals, clergy, government officials.  There's some conspiracy, and a greater magical mystery, all of which is painted against the backdrop of dissent about the newly passed Stamp Act.

The world-building was thin -- very little explanation or background on the magic featured, which was nice for me because it just was -- so those looking for something like Jonathan Strange & Mr Norrell will be disappointed.  Jackson's writing is straight-forward and his emphasis is on the characters rather than the setting; aside from the Stamp Act and related politics, this could have been any ambigu-fantasy locale.  (For good and for bad.)

As a starter novel, this one entertained me. I liked it enough, although I found myself checking the page numbers now and then because I just felt like the novel never really started. One hundred pages in, and the novel's key mystery had just been set up, but fifty pages later, we were still getting set up: Ethan's previous love, his relationship with other spellers in the city, that kind of thing. Were this a 600-page novel, I wouldn't have minded, but seeing that the end was near, I found myself worrying about the story getting a fair shake and things being rushed.  Ultimately, the story unfolded -- and ended -- neatly enough, satisfying me and piquing my interest in the sequel.  (I have to wait until 2013?! Boo hiss.)

Thanks to the publisher, I'm able to offer TWO copies of Thieftaker! To enter, fill out this brief form. Open to US readers only (sorry!). Ends 7/27.