Witness the Night by Kishwar Desai 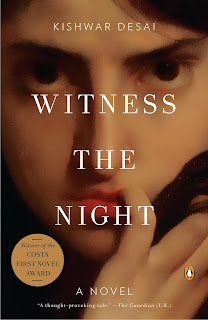 Rating: Liked a great deal.
Did I finish?: I did, in a matter of hours.
One-sentence summary: A volunteer social worker is invited to solve the thirteen-person murder of a well-known family in northern India and ascertain whether the massacre's sole survivor -- a young girl -- is a victim or villain.

Do I like the cover?: I do -- it's so beautiful and evokes the character of Durga.

First line: You asked me to write my thoughts.

Buy, Borrow, or Avoid?: Borrow or buy, especially if you like Scandinavian crime fic and want a new locale.

Why did I get this book?: I love fiction set in India.

Review: I inhaled this book in about three hours, unable to stop. The premise is dark and grim: a sixteen year old girl is found bound in her house, surrounded by the poisoned, stabbed, and burned members of her family. As the last one living, the police arrest her for the crime. Simran Singh, a volunteer social worker of sorts, is asked to investigate the girl's participation by an old friend who knows the family, and Simran quickly discovers that the girl's family, and this remote northern Indian town, has many dark secrets to it.

While the story is told by Simran as she goes through her investigation, we the reader are also privy to Durga's diary, notes made at Simran's suggestion. As a result,I was able to figure out the mystery about halfway through the book, but I didn't feel like the story was about solving the mystery as much as it was about watching the way the investigation unfolded -- and how the community responded to the results.

Both Durga and Simran are wonderful characters, absolutely compelling, and Desai's writing reads effortlessly.  However, this book has some disturbing elements -- infanticide, child abuse, violent cruelty -- but Desai's inclusion isn't meant to be gratuitous.  Knowing that -- and trusting Desai -- I found the end of the book satisfying (I had a gasp-aloud moment at the very last page -- if anyone else reads this, get in touch so I can gossip about it!).

Although this book was written as a stand alone novel, the author was encouraged to write another book featuring Simran and it seems this will become a series.  I'm sort of series-ed out at the moment, but Simran is such a unique character, and Desai's writing wonderful, I know I'm going to find the next book.
* book reviews book rating - liked