Miss Me When I’m Gone by Emily Arsenault 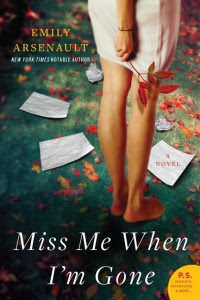 Rating: Liked.
Did I finish?: Yep, in one, can't-stop day
One-sentence summary: Pregnant Jamie investigates her best friend's mysterious death and work-in-progress, a memoir about murder, family, and country music.

Do I like the cover?: It's pretty, but I don't think it totally captures the feel of the story.

First line: This gem might be well known among seventies tabloid readers and longtime country music fans, but perhaps not the general reader: Tammy Wynette once saved Burt Reynolds from drowning in a bubble bath.

Do... I wish Tammyland was a real book?: While I'm never going to read Eat Pray Love, the excerpts from the fictitious Tammyland -- a honky-tonk Eat Pray Love, of sorts, featuring female country music stars --were wonderfully enjoyable.

Does... Emily Arsenault sound like an awesome person?: YES. Her author bio had me howling.

Buy, Borrow, or Avoid?: Borrow or buy -- this is a fast, fun, comfy thriller.

Why did I get this book?: Who doesn't like a good thriller for the summer?

Review: I could get embroiled in recapping this, so I'm going to try to be brief. Jamie, seven-months pregnant, is named unofficial literary executor when her friend Gretchen dies from a suspicious fall after a reading. Gretchen penned Tammyland -- a honky-tonk Eat Pray Love, of sorts, featuring female country music stars -- and was working on a sequel, ostensibly featuring male country music stars. Quickly Jamie learns, however, that Gretchen was actually pursuing her own past: her mother's murder and her biological father, unknown to her.

Originally, I thought this would be straight up, literary-ish thriller, but the story isn't so much about racing to see who murdered Gretchen (if she was murdered) than seeking the answers the the questions Gretchen was asking. Gretchen's mother was murdered at 24, when Gretchen was 7; her mother's then-boyfriend was implicated, but ultimately not jailed. Somewhere was Gretchen's biological father. Gretchen's nascent second book -- already overdue to her publishers -- was wildly off course, and Jamie's challenge was to see if there was anything already written that could be submitted. Jamie's interest, however, veered along with Gretchen's, and the novel happily follows that thread.

Jamie, our pregnant heroine, was pretty fun -- I liked how irreverent she was. Bratty at times, tired, cranky, passive aggressive and just plain stubborn. At moments, I found myself rolling my eyes; at other times, I was cheering her. She felt good and real and I enjoyed her amateur investigation.

There's a low stress tension to the story, which I liked, as high tension novels can sometimes kill me. Not slow, though -- there's plenty of twists and hints and red-herrings -- but I wasn't kept up all night racing through the book. (I did spend all day reading this, taking it into the bathroom with me at work so I could sneak a read now and then!) My favorite part of this book, however, was the Tammyland bits. While I didn't like Gretchen necessarily, I liked her writing (or at least, Arsenault-writing-as-Gretchen).

A solid mystery thriller for the summer with a very New England-y in feel (not bucolic Concord New England but gritty working class New Hampshire New England) should you want an unusual armchair escape.

I'm thrilled to offer one lucky reader a copy of Miss Me When I'm Gone. To enter, fill out this brief form. Open to US/Canadian readers, ends 8/17.