As It Is On Earth by Peter M. Wheelwright 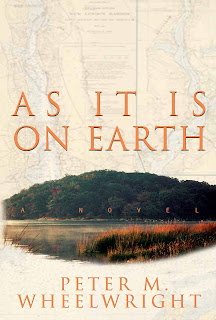 Title: As It Is On Earth
Author: Peter M. Wheelwright

Rating: Liked.
Did I finish?: I did!
One-sentence summary: In the last months of 1999, a 30-something New England professor

Do I like the cover?: I do -- nature and the New England landscape feature heavily in this novel.

First line: There is an old story that a Bible was found in a wall cavity at a former Dominican Nunnery in San Cristobal de las Casas, State of Chiapas, Mexico.

Buy, Borrow, or Avoid?: Borrow or buy if you like poetic, mystical family fiction, a strong sense of place, philosophical ruminations and mundane concerns twisted together.

Why did I get this book?: The setting -- New England -- and the focus on family, legacy, love, and identity was too tempting to resist!

Review: Set in the fall of 1999, the novel is narrated by Taylor Thatcher. Maine-born, Mayflower-descended, Taylor is 30, a professor at a university in Hartford, Connecticut. In the last months of 1999, Taylor's mundane life is oriented around academia -- a conference he's organizing, classes he's teaching -- while his emotional life dances back-and-forth between ignoring and embracing his family's history, familial secrets, emotional scars, and unacknowledged desires.

The danger of such narrow, selfish focus is that if our hero is unappealing, the hundreds of pages spent with him can be agony. In this case, thankfully, Taylor Thatcher is an interesting, sympathetic, maddening figure. I can't say I liked him necessarily but I didn't dislike him; I found his love and hate of place and family resonant, real, inviting, and off-putting.

There's good reason for Taylor's confused, complicated introspection. Taylor's younger brother, Bingham, shares his birthday, and a tangled connection -- Bin is technically his half-brother, and half-cousin, too. Taylor's mother and Bin's mother were sisters. Taylor's father, small town doctor and deacon at the local church, was a scion of the community, an alcoholic, perhaps a swinging adulterer as well. Taylor's ex-girlfriend has just returned to Hartford, pregnant and engaged, and a grad student Taylor hoped would date his brother is a woman he himself is intrigued by. A historian, Taylor's interest in the philosophical developments that shaped the study of science is reflected in his meditations on New England religiosity, the things we inherit from family, and the wounds from childhood that never heal.

It takes a little bit of time to sort everyone out. It isn't that they're indistinct but with Wheelwright's prose -- Thatcher's reticence to name things -- it can be unclear what we've just learned. Wait - is she transgender? Are they sleeping together? Echoing Thatcher's own intentional obfuscation and confusion, perhaps; and once I allowed myself to just wait for the reveal, I didn't mind constantly being surprised by the revelations shared.

In terms of plot, not much happens, technically, but it's Taylor's rich inner world and Wheelwright's poetic merging of grim family skeletons and philosophical ruminations that made this so delicious. Often, I thought I knew where a thread was going only to be surprised by the deft way Wheelwright knotted things up.  (See my Teaser Tuesday for a lovely example of Wheelwright's writing style.) I described this to a friend as a kind of coming-of-age novel -- even though Taylor is 30, he's finally growing up, facing some hard truths, learning to let go of old hurts and secrets -- and I was surprised to find that, upon finishing this book, I missed Taylor and his family.

I'm thrilled to offer a signed copy of As It Is On Earth to one lucky reader! To enter, fill out this brief form. Open to US and international readers, ends 10/5.