- September 12, 2012
Earlier in the month I read S.G. Browne's hilarious and zippy Lucky Bastard, a wry and breakneck novel about a man who can literally steal a person's luck. I'm thrilled to share my interview with Browne, so read on to learn more about him and his book, and be sure to enter my giveaway for a copy of Lucky Bastard! 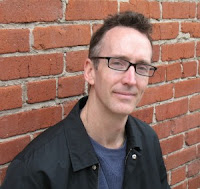 The first short story I wrote for my creative writing class in college was about a college student who is halfway through writing a short story for his creative writing class that’s due the next day when his computer crashes, taking his story with it. (This was back in 1988, when hardly anyone owned a computer and there were no flash drives and everything was saved on 5 ¼ inch floppies.) So the main character borrows a typewriter and tries to recreate his story but grows frustrated and ends up making the fatal proclamation that he’d do anything to get his computer working again. Naturally he turns on the TV, comes across a commercial for computer repair, and ends up signing a contract with the repairman, whose name is Bill Zebub. (Yes, my computer died while I was working on my short story that was due the next day, so I ended up typing up the aforementioned story on an electric typewriter I borrowed from a friend.)

I used to have a routine but now I like to mix things up. Sometimes I’ll work at home on my desktop, other times I’ll sit on my couch with my laptop or take my laptop to my local café. In an ideal world I’ll write from 8-11am and then take a break for some exercise and lunch then come back and write for another 2-3 hours, but for the most part I just try to get 4-6 hours a day. 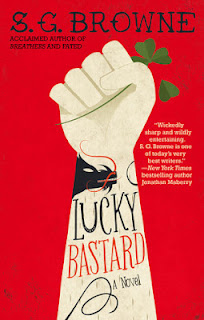 Was Lucky Bastard the original title of your book?

My first two novels are titled Breathers and Fated, so I originally planned on sticking with the single word titles and calling it Lucky. But then my agent asked me what I thought about Lucky Bastard and I realized two words were better than one.

As you were writing Lucky Bastard, was there a particular scene or character that surprised you?

I have to be a bit vague so I don’t give away any spoilers, but I was surprised by the scene where Nick Monday first enters the Starlight Room atop the Sir Francis Drake Hotel and meets the woman in the bar. I don’t plot out my stories but discover them as I write, so when she introduces herself at the end of the chapter, I realized my story was getting a little more complicated.

I’m a fan of books and movies but don’t get to spend much time indulging in either when I’m working on a project, so I’ll dive into a good book or go on a movie binge. I also enjoy getting out on my bicycle and spending as much time at the beach as I can manage.

Sacré Bleu by Christopher Moore. I’m a fan of Moore and loved his latest, but it ruined the next two books I attempted to read because they couldn’t measure up.

I'm thrilled to offer a copy of Lucky Bastard to one lucky (ha!) reader! To enter, fill out this brief form. Open to US/Canadian readers, ends 9/21.