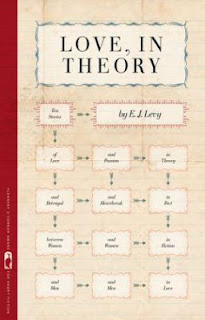 Rating: Loved, in reality, not theory.
Did I finish?: I did, and I reread about half the stories!
One-sentence summary: Ten short stories on love, loss, and everything in between.

Do I like the cover?: I looooove the cover -- it's kind of like a mock flow chart identifying the various themes

First line: It's not like we believed that they were the sons of God or anything, but for a while (before Dr. Davidson and all the publicity, before it became a story, when we were still just folks caught up in the mystery of the thing), we felt kind of special -- chosen, you might say -- to be host to the three Christs of Moose Lake, Minnesota., from 'The Three Christs of Moose Lake, Minnesota'

Buy, Borrow, or Avoid?: Borrow or buy -- this is marvelously crafted fiction, tight and emotional, pretty and captivating.

Why did I get this book?: The title -- I love it so -- and Levy was award the Flannery O'Connor Award for Short Fiction which seemed very promising!

Review: You know how when you meet someone, and you immediately decide they're a total snob and you hate their guts, and then you spend more time with them and you realize you were totally wrong and this person is actually wildly cool, and now you've got to backpedal to all your friends about how that person is actually not as awful as you originally said...? Well, that's exactly my experience with this book.

On Friday I blogged about how I was kind of on the fence about this book because there's adultery and a lesbian who falls for a married man, and I definitely had my eyeballs rolling as I opened the first page. Ooops.

I loved this collection. (Not in theory, either, but for real.)

Every story was like, I don't know, something delectable and redolent. Be it a piece of chocolate or a slice of cake or a gorgeous aria -- Levy's writing sucked me in from the first line and I wanted to savor her stories, linger with them.

The characters felt real, immediately, their emotional state familiar and resonant, and their challenges and conflicts achingly, uncomfortably articulated. In the much feared 'Theory of Dramatic Action', with the lesbian and married man, I found a character I could relate to and understand, and a poignant situation that made me tear up a little. The volume's opening story, 'The Best Way Not to Freeze', about a woman's first real love, was so good I read it twice, then read it to my wife, then to a friend. After that, when I started reading 'The Three Christs of Moose Lake, Minnesota' to my wife, she just took the volume from my hands to inhale on her own. (I raced through this book in one night, then reread almost all the stories over the following two days.)

I have to stop saying I dislike short fiction because clearly, I do like it. These snapshots of relationships, of people, of emotional landscapes are as satisfying as a chunky novel. Maybe more so -- they're like the first bite of a fabulous meal. You want the taste to linger, but it disappears. The next story, the next bite, is just as intriguing. The only perk is, after glutting myself on Levy's book, I still wanted more.
* book reviews book rating - loved