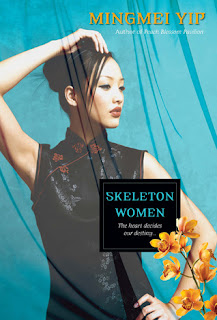 Rating: Okay to liked, depending...
Did I finish?: I did!
One-sentence summary: The story of an orphan-turned-seductress in 1930s Shanghai.
Reading Challenges: Historical Fiction

Do I like the cover?: Eh, I'm not wild about it. It does the ambigu-Asian thing which I think minimizes the flavor of the story, and I don't think the flowers featured are camellias, which show up a lot.

First line: It all happened because I was considered perfect material to be a spy -- beautiful, smart, and most important, an orphan.

Buy, Borrow, or Avoid?: Borrow if you like assassins but aren't into urban fantasy.

Review: I'm of two minds about this book but I think in the end I can say I enjoyed it. Camilla, a 19 year old orphan, was raised by a Chinese gangster to be the mistress of his rival -- in hopes that Camilla can lead the man to ruin and death. Beautiful, a talented singer, ruthless, and emotionless, Camilla flourishes in Shanghai amid wealth, decadence, violence, and intrigue -- until she meets Shadow, a beautiful and talented magician and illusionist who vies for her seat in Shanghai royalty.

The title comes from a phrase tossed at women like Camilla, either a curse or a compliment: 'skeleton women' are women who drive men to death, bleed them dry, leave them empty like skeletons.

Yip employs an artificial, coy writing style for Camilla that mimics the ornate, flattering way she flirts with her gangster lover. I mostly enjoyed it -- the narrative is peppered with the aphorisms and wise sayings she takes to heart, the stratagems of Sun Tzu (Sunzi in this book) she studies -- but now and then, it felt childish and awkward.

I didn't feel much for Camilla, neither like nor dislike; as Camilla often tells us, she was trained not to have feelings but as a result, I didn't have any for her in return. I read along, interested enough, but not invested, even when I could tell Camilla was thawing, having feelings, making decisions from the heart -- but it was a little too late (for me at least).

My jacket blurb doesn't mention the 1930s and had I not read it elsewhere, I don't think I could say this was a historical novel necessarily. Perhaps the lack of cell phones clued me in that it wasn't contemporary, but otherwise, I don't think there's a strong historical emphasis. Those wanting a very evocative sense-of-place might not find it here.

Rereading what I've written makes it sound like I had many problems with this book, which I guess I did -- I've only noticed it now that I'm having to respond. While reading, I raced through it, entertained, and I'm curious about Yip's other novels.
* book reviews book rating - liked