The Round House by Louise Erdrich 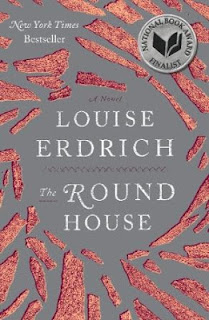 Rating: When I started this review, it was 'liked a good deal, maybe loved', but upon finishing, I have to say, it is totally loved. Likely top ten of 2012.
Did I finish?: I couldn't stop.
One-sentence summary: Joe, a twelve-year old Ojibwe boy in North Dakota, becomes obsessed with finding his mother's assailant and learns more about his fractured community, family, and tribe.

Do I like the cover?: I do -- I find it hypnotically striking, and the colors are appealing, and the broken pieces suggest the crime breaks up a family as well as the titular Round House.

First line: Small trees had attacked my parents' house at the foundation.

Buy, Borrow, or Avoid?: Ohmygod, borrow or buy. Dark, pretty, sad, horrifying, poignant. I think Scandinavian crime fic fans might like this one -- it felt v similar in some ways -- as well as those fascinated by life for American Indians.

Why did I get this book?: I've long been an Erdrich fan and I jumped at the chance to read this one!

Review: I'm not sure how to write this review. This is a book in that made me forget I was reading and I resented every interruption or pause. I missed my subway stop while reading and stayed up too late to finish. It was worth it.

Set in the 1980s, the story is told by Antone Bazil Coutts (the second), nicknamed Joe, who is twelve when his mother suffers a terrible assault. Raped and nearly burned alive, she retreats into sickly solitude while her husband, a tribal judge, struggles to ascertain where the crime took place. Depending on whether it occurred on Indian land, off reservation, or on fee land determines which police pursue the crime -- and shapes the likelihood of justice for Geraldine Coutts. Joe is obsessed with solving the mystery and finding his mother's assailant, and in the process of digging around, learns more about his family, his tribe and community, and adult life.

While the premise is grim, this novel didn't make me want to die. Joe is a charming and fascinating narrator, obsessed with Star Trek: The Next Generation and surreptitiously studying women's breasts. He gets his first job to avoid being home alone with his nearly comatose mother. Through accident and determination, he stumbles upon secrets

In some ways, this is a literary thriller, a poetic sort of crime novel (I'm recommending it to my Scandinavian crime fic loving friend, for I feel like there are thematic similarities) but even those who aren't drawn to crime fic might want to give this one a read. There's armchair escape -- Ojibwe reservation in North Dakota -- and lovely writing about coming-of-age against the backdrop of real lost innocence. For me, it also provoked a kind of nostalgia -- I spent some of my formative years in South Dakota near a reservation and saw first hand the uneasy tension between those neighboring communities -- and Erdrich's writing evoked that time and place so well I got goosebumps.

I suspect this will make my favorite list for 2012. It read fast for me even though it is both a thoughtful and plot-y novel; familiar and alien in equal part, the characters and locale immediately captured my attention and imagination. Not a book I will quickly forget.

I'm thrilled to offer a copy of The Round House to one lucky reader! To enter, fill out this brief form. Open to US/CA readers, ends 11/9.