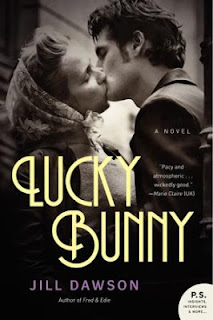 Rating: Luuuuuuuuuuuuuuuuuurved!
Did I finish?: I did -- I raced through this one, even when too stressed
One-sentence summary:
Reading Challenges: Historical Fiction

Do I like the cover?: I do -- I adore it. It resembles Queenie and Tony perfect.

First line: Queenie's not my real name, of course.

Buy, Borrow, or Avoid?: Borrow or buy if you like novels featuring huge, evocative, unshakeable personalities and an unusual look at WWII London.

Why did I get this book?: Superficially -- the cover.

Review: I loved this book, which is surprising because it has a current of domestic abuse which I really can't take because I'm such a weenie, but, ohemgee, I adored our anti-heroine/narrator, Queenie Dove.

Literally, from the first line, I was in love. Dawson's writing style -- casual, sharp, very Queenie -- is in present tense first person, but it so works for this story. Clever Queenie is cocky, arrogant, sure of herself -- and with good reason -- and the writing style has as much personality as Queenie does. It made the story bounce and race and gripped me.

This isn't a World War II novel, (the novel goes through 1930s to the 1960s), although Queenie was born in 1933 and experiences some of the most horrifying aspects of WWII London. (In addition to the other generally horrifying parts of her life!)

Born into squalor with an inattentive mother (that's being polite) and a criminal father, Queenie learns quickly what she needs to do to survive -- and not just that, but thrive. Caring for her beloved younger brother Bobby (who is 'a few currants short of a teacake', according to their Nan), they're sent to the country with the other London children -- until Queenie decides that isn't in their best interest and wrangles herself and Bobby back into London. They survive the horror of the Bethnal Green Tube disaster (a claustrophobic part of the book that made me race to the front porch for fresh air) only to face more hardship -- which Queenie is determined to overcome.

During the Blitz, Queenie learns to be a thief, and she quickly proves herself the master of it. Embraced and cared for by a circle of other female thieves and prostitutes, Queen -- and Dawson - revealed a world unfamiliar to me, the glamor, seediness, and grasping need of post-war London. She finds some measure of sexual satisfaction in Tony, handsome and dangerous, but has to decide what sacrifices to make for herself -- and eventually, her daughter.

I suppose Queenie could be unlikable -- she's a criminal, and probably a bit of a liar -- but I was in love with her brash, vivacious, and unapologetic zest for survival. This was the only book that could help me ignore the drama of Hurricane Sandy: once I had Queenie in mind, I couldn't shake her!

I'm thrilled to offer a copy of Lucky Bunny to one lucky reader! To enter, fill out this brief form. Open to US/Canadian readers, ends 11/16.