The Raven's Heart by Jesse Blackadder 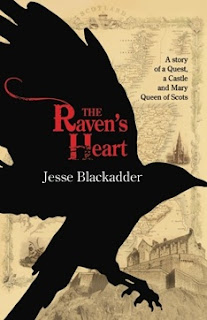 Rating: Looooooooooooved -- top ten of 2012 love.
Did I finish?: Couldn't put it down!
One-sentence summary: In 16th century Scotland, a woman finds freedom and danger in the guise of a boy, and proves her loyalty to Mary, Queen of Scots in an attempt to win back her family's legacy.
Reading Challenges: Historical Fiction

Do I like the cover?: I do -- not traditional given it is a royal court-set hist fic, and I'm grateful for that!

First line: Scotland, 1519, twenty-six years before I was born.

Buy, Borrow, or Avoid?: Borrow or buy, especially if you like good meaty historicals with a fascinating protagonist and wonderful sense of time/place.

Why did I get this book?: Honestly, I think I was curious about the Blackadder surname.

Review: I loved everything about this book. The plot, the places, the people (oh, the people!), the mood, the drama -- everything. I'm not even sure where to start with this gush-fest!

Blackadder's novel grew out of her research into her surname, and while normally family-inspired novels give me the gibblies, in this case, we all win. The historical Blackadders have a story straight out of an opera or Gothic tale: widow violently married off to a vicious noble, evil stepfather marries her daughters to his brothers, and subsequent Blackadders are all murdered before they can foment rebellion against him. In this climate, surviving Blackadder William is re-invented as a merchant sea captain and his daughter Alison -- the Blackadder heir -- is transformed into his nephew, Robert Blackadder.

The novel opens in 1561, with Alison-as-Robert on the ship that is bringing Mary Stuart aka Mary, Queen of Scots, to Scotland. Although Alison has grown used to living life as a boy, her father believes they can better push their cause if Alison becomes one of Mary's ladies-in-waiting, and Alison finds herself away from the comfortable identity (and clothes) she's familiar with and struggling to embody a sophisticated lady at court.

What could be a simple story of a girl-who-dresses-like-a-boy shenanigans -- a little sapphic longing, lots of court drama -- is actually a rather meaty, dense, and evocative historical novel of Mary Stuart's court and a woman's confusing place in it. When Alison's skill at passing for a boy is discovered, it becomes her greatest asset and one that grants her unusual access and power -- and of course, increased danger. While Alison's father is driven to reclaim Blackadder Castle, Alison finds herself more drawn to her Robert persona and all it entails -- right down to romance with women.

Blackadder (the author) created a fantastic main character in Alison/Robert -- I was there, from the first page to the last -- and I fell in love with the world she evoked. Royal court hist fic is not a favorite of mine, but through Alison/Robert, the reader sees a more robust view of 16th century Scotland -- the court and the life of the non-nobles. Being unfamiliar with this era, I can't say how accurate the events are represented, but in terms of pacing, narrative arc, and character development, I was immersed. I didn't want this book to end.
* book reviews book rating - loved