The Forgotten Queen by D.L. Bogdan 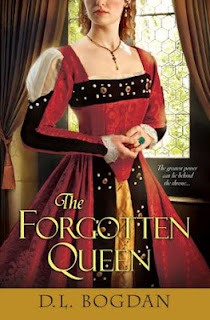 Rating: Liked.
Did I finish?: I did!
One-sentence summary: The life of Margaret Tudor, princess and queen, who battles for love, her family, and her happiness in 16th century Scotland.
Reading Challenges: E-book, Historical Fiction, What's in a Name

Do I like the cover?: I have no strong feelings. I don't know if the dress is accurate, but the model has the reddish hair our heroine is noted for, so that's a perk!

First line: It began with smoke.

Buy, Borrow, or Avoid?: Borrow or buy, especially if you like Tudor-fic.

Why did I get this book?: I enjoyed Bogdan's other novel and was curious to see how she would handle this Tudor.

Review: I'm no fan of the Tudors but having enjoyed Bogdan's previous novel, I decided to give this one -- with its focus on Margaret Tudor, sister of Henry VIII -- a go, and I'm glad.

This is a wonderfully readable hist fic that hits the elements of what I like in a read: historical ambiance that feels real, a main character I like, historical relationships articulated in a way that seems believable, and enough drama and emotion to make me care.

The Margaret of this novel is Margaret Tudor, sister of Henry VIII. Raised by her father Henry VII to embrace her God-given sovereignty, she is a girl who wants love after so much loss -- her brother Arthur, her mother, her other siblings who died as infants.

Margaret is married at 13 to James IV, King of Scotland, told to keep peace between the two kingdoms.  Her new husband is 30, an experienced lover of women, and father to five bastards.  Margaret drowns herself in fripperies and fetes, basking in her husband's sweet attentions.  But tragedy strikes -- thanks to her brother, Henry, now king -- and suddenly the sweet girl yearning for love finds herself struggling for so much more.  Her infant son is crowned King and she risks losing her position as regent if she marries.  And yet, on her mind, always, is the desire to be loved for herself, and that motivates her decisions as much as her passion to defend her son's birthright.

Bogdan handled well the historical issues that always give me the squicks, like 13-year old brides, and I liked her characterizations.  (I'm not a Henry VIII fan so that he shows up like a jerk in this book is fine with me.)  I was taken with Margaret, who could potentially be cloying to some readers: she's so desperately needy for love, she'll take affection at any turn, and hungers for it in almost all her interactions.  (It means she also makes some frustrating life choices.)

In her author's note, Bogdan expressly states this novel is "a dramatic interpretation meant to entertain".  As I'm not wedded to this era, that was just fine for me, and I was deeply entertained by this book.  Moved, amused, saddened, gladdened, this was a quick read of a less-known royal that I enjoyed.  Very much worth breaking my Tudor ban!

I'm thrilled to offer a copy of The Forgotten Queen to one lucky reader! To enter, fill out this brief form. Open to US and international readers, ends 2/8. Be sure to check back for my interview with the author on 1/30 for another chance to enter!
* book reviews * giveaways book rating - liked