A Future Arrived by Phillip Rock 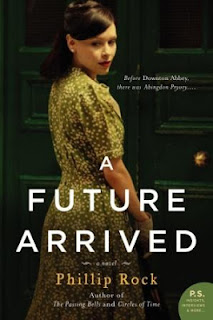 Rating: Loooooooooooooved.
Did I finish?: Oh yes, and cried at the end!!
One-sentence summary: The final novel in the Greville family saga, as parents from one war watch their children experience their own war.
Reading Challenges: Historical Fiction

Do I like the cover?: I do -- less so than the previous two, but it matches the set.

First line: Spring came at last after a winter of snow and icy winds that had sent trees crashing into the tangled depths of Leith Wood and had blocked the narrow country roads with drifts.

Why did I get this book?: Like I was going to pass up reading this final volume!

Review: I am seriously not ready for this trilogy to end. I actually feel melancholy, reluctant to start another book for fear of losing the 'taste' of the novel. (For recaps, see my reviews of the first novel, The Passing Bells, and the second novel, Circles of Time.)

The novel opens similarly to the first book, The Passing Bells, with Lord Stanmore getting dressed for the day, and my heart lifted -- until the scene changed to sadness with the death of a tertiary character. With that mood established, Rock's final novel is a bounce between familiarity, bittersweet loss, and heady hope.

Seven years have passed between the end of the second novel and the start of this one. Those who wanted more time with the 'original' cast might feel some loss at the shifting direction -- I will admit I initially was disappointed -- but the twining connection between the 'new' cast and the other characters, as well as Rock's wonderful writing, sucked me in and I no longer mourned the shifting focus.

This book has the largest scope -- ten years -- from 1930 through 1940 and in that sense, I think it felt a bit rushed. Rock covered six years in The Passing Bells but conveyed, I thought, the unending grind of trench warfare rather well without losing the reader.  I felt the two years covered in the second book was too little -- even though the page length was the same as the first novel! (What can I say, I just want more!)  Still, this isn't an unsatisfying story: threads are tied up, characters come to some concluding arc (whether I like it or not!), and the Grevilles and their beloved Abington Pryory continue to live on, changed.

Our intrepid American reporter Martin is still the moral 'voice' of the novel; his interest in European politics and experience as a war reporter allow him to be a bit of an oracle or Greek chorus here, hinting at what we know will come. Fenton Wood-Lacey, still in the military, returns to the same battlefields where he fought during World War I, again fighting Germany. His daughters are now vibrant and passionate young women, hungry for their own victories, infatuated with soldiers the way the characters from the first novel were.  Lord and Lady Stanmore, the Greville patriarchs, clinging to the past as much as they grab for the future, keep their beloved Abingdon Pryory as their seat.  Rock doesn't forget the working class either: the brother of one of the Greville house maids becomes a main character, eager to change his fortunes the way he saw his sister change hers.

As with his previous novels, Rock articulates so well the societal shifts in behavior, attitudes, and mores -- and the ways parts of society haven't changed. There's a seen where a character decides to marry a divorcee, and Lady Standmore has to have a frank conversation with the woman about how, pre-war, this marriage would have never happened and how, even now, some society will never accept her. It is in this world that the children bristle -- having grown up in a post-war era of parties, blatant sexuality, explosive politics, economic boom -- and just as they hurtle into adulthood, war approaches.  The bookending of these two conflicts is wonderful/upsetting/moving/cinematic/exciting/so ridiculously sad, and I love/hate Rock for doing so.

The ending was lovely, a note of hope, but I still got teary just remembering all the losses and changes that the characters experienced. (I'm getting a tiny bit teary right now!)  This trilogy definitely makes my top ten for this year -- these books were everything I love about reading -- and I feel the absence of my favorite characters now that I'm done.  I anticipate a reread of these books -- they're that kind of read -- and I hope this trilogy enters into the canon of 'classic' historical fiction.

To enter, fill out this brief form. Open to US/CA readers, ends 3/1.  For another entry, see my review of Circles of Time and my review of The Passing Bells.