Circles of Time by Phillip Rock 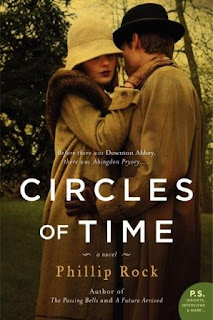 Rating: Loooooooooooooooooooooooooooved.
Did I finish?: Yep.
One-sentence summary: Following World War I, the residents of Abingdon Pryory, their employees, and their friends come to terms with the changing world of post-War Britian.
Reading Challenges: Historical Fiction

Do I like the cover?: Yes -- stunning. While I know they're just ambiance shots, I did mentally decide what couple it represented, and was satisfied.

First line: He drove up to Flanders in the early summer of 1921 knowing that it would be for the last time.

Buy, Borrow, or Avoid?: Borrow or buy, but start with Book One and have Book Three on hand to immediately begin!

Why did I get this book?: The cover, the setting, the era (and of course, wanting to continue the story from The Passing Bells

Review: I really haven't been able to breath since starting these books, the three novels that make up Philip Rock's Passing Bells trilogy. I am in serious love.  (See my review of the first book for the start of my swooning fit.)

This book has a much tighter time span -- 1921 to 1923 -- and starts a year after the first book ends. Life in Britain has changed: the 'Jazz Age' has dawned, and the public starts to accept a more open discussion of the events of World War I. Rock covers an array of details in this novel as in the first book; here, we learn about the development of engines for jet planes and the growing Fascist presence in Britain.

A good deal -- but not all -- of the characters from the first book return. As in life, some of the characters have come to terms with the losses from the war, while others are still in denial about it. Beautiful Alexandra, no longer flighty and superficial, must be married, according to her mother -- but the war decimated the population of marriageable men. Four members of the Abingdon Pryory staff were killed in the war, and what staff are there are new, men too old to have served. Chauffer Jamie is now a successful engineer, and Martin still travels Europe, reporting on the shifting political landscapes. (Rock has really honed in on his American journalist, Martin Rilke, as the main character of this saga, which kind of disappoints me because he's not my favorite. Which isn't to say he's not interesting or anything, but I'm far more fond of the women and their challenges.)

Oddly, even though the page count is similar to the first book, I feel like I saw 'less' of the characters than I did in The Passing Bells. Perhaps it's because Rock has narrowed his focus a little, keeping an eye on Martin, with the rest of the characters circling around that plot arc.  (I'm hesitant to squee or wail about specific characters for fear of spoiling the story for anyone, so I apologize if this review seems super vague!)

Rock still has the habit of having some major events happen 'off the page', so to speak; we only learn of it when a character mentions it in passing.  Which isn't to say the reader is denied emotion and drama -- that's to be found here, although less gutting than in the first book -- as we hurtle toward the 1930s, World War II, and a shifting focus from the parents to their children.

This could possibly be read as a standalone -- Rock recapped characters and plot quite frequently, which surprised me given that originally there had been only a year between the publishing of the first and second book.  (Rock took four years between this book and the final book in the trilogy.)   Still, for maximum oomph, pick up The Passing Bells before this one, and have a weekend, lots of tea, and tissues handy.

To enter, please be a follower on Twitter, Facebook, or via Google Friends Connect. You can let me know how you follow on this form. Ends 3/1, open to US and Canadian readers.

For another entry, be sure to see my review of the first book, The Passing Bells and my review of A Future Arrived.
* book reviews * giveaways book rating - loved