The Aviator's Wife by Melanie Benjamin 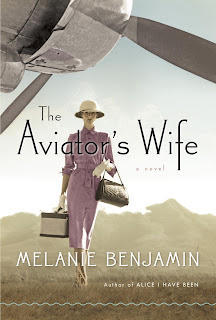 Rating: Loved!
Did I finish?: Oh heck yeah.
One-sentence summary: From the 1920s through the 1970s, this novel follows the life of Anne Morrow Lindbergh, wife to the famed aviator.
Reading Challenges: Historical Fiction

Do I like the cover?: I adore it -- the color, the layout, the ambiance -- gorgeous!

First line: He is flying.

Do... I feel the same way toward Charles Lindbergh after reading this book?: YES -- but I have softened my attitude toward Anne Morrow Lindbergh.

Do... I yet again wish I was part of a book club?: YES. In addition to offering reading guides to all three of her novels, Ms. Benjamin is also available to chat with book clubs and groups.

Do... I love the nerdy extras available at Benjamin's website?: YES. For all three of her novels, she has historical background available, and for this one, she links to archives and film footage

Buy, Borrow, or Avoid?: Borrow or buy if you like biographical historical fiction.

Why did I get this book?: I've been dying to read another Benjamin novel after I read and adored Alice I Have Been.

Review: I fell in love with Melanie Benjamin's first novel, Alice I Have Been -- it was emotional and a bit raw, it made human this nearly mythological figure (Alice Liddell) -- and so I have been a slavish fangirl since.  Which is why, as I'm no Lindbergh fan, I still went into this book with some excitement, curious about how Benjamin would handle Lindbergh's politics and later-in-life choices.

If you don't know much about Charles Lindbergh beyond his famous flight on The Spirit of Saint Louis, that won't be an impediment here.  You can learn about him in much the same way his wife Anne Morrow did, by simply spending some time with him.

The novel opens in the 1970s, with Anne facing her dying husband and the proof of his last selfish acts.  As she struggles to make peace with with the man, the story flashes back to their marriage, beginning in 1927 when Anne met Charles.

Anne Morrow was the daughter of an American banker who later became an ambassador.  A student at Smith -- like her sister, like her mother -- Anne was the mousy, quiet, invisible Morrow.  Her older brother Dwight was the Morrow heir; her older sister Elizabeth was golden and clever.  Her younger sister Con was the baby, all excitement and enthusiasm.  But Anne seemed to offer nothing of note until her surprise engagement to famed aviator Charles Lindbergh.

Their marriage propelled Anne into a world of stardom and fame unseen, Benjamin suggests, until Princess Diana. Chased by the press and public alike, Charles and Anne had to dress in disguises to go out and hire security guards for their homes. Worse, perhaps, was their marriage, full of expectations as well. Charles challenged Anne to be his co-pilot and crew, and she became a licensed pilot and radio operator, breaking records on her own. Yet her fame really lay, of course, in her connection with Charles. Their marriage becomes seriously fractured in 1932 when their 20-month old baby was kidnapped, and to my surprise, Anne's story didn't stop there. (Forty more years of things happen, but I'm not going to summarize them -- you'll want to see how things shake out here.)

Benjamin is a star at biographical historical fiction. She wrestles with the historical record and evokes people who are real, who answer to the choices we know they made. And while I might be dubious of Anne Morrow Lindbergh and seriously judge her as a person, I feel like I got a glimpse of who she was -- and I couldn't shake her. (Although I suppose my only critique -- and this is totally emotional knee jerk stuff -- is that I thought Benjamin was too much of an apologist, voicing for Anne an acknowledgment of Charles' dangerous political beliefs even though, in her lifetime, she made no noise of dissent or disagreement.)

As with Alice I Have Been, I was struck by Benjamin's ability to convey the both the mores and societal attitudes of the time as well as critique of those expectations and behaviors without feeling anachronistic or didactic.

I'm thrilled to offer a copy of The Aviator's Wife to one lucky reader! To enter, fill out this brief form. Open to US and Canadian readers, ends 3/1.