The Burn Palace by Stephen Dobyns 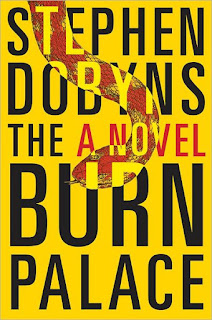 Rating: Okay to liked.
Did I finish?: I did, in about two days.
One-sentence summary: One kidnapped baby, one pack of super aggressive coyotes, one lovelorn cop, one chipper and slick token black cop, one small town in Rhode Island, one complicated mystery.
Reading Challenges: What's in a Name?

Do I like the cover?: I do -- it fits into the opening scene,

First line: Nurse Spandex was late, and as she broke into a run her rubber-soled clogs went squeak-squeak on the floor of the hallway leading to labor and delivery.

Why did I get this book?: I intrigued by the jacket blurb and Stephen King's very very positive rave review.

Review: I finished this book in two days, literally staying up until ungodly hours of the night to do so. Upon finishing, I can say it was a messy, creepy, action-filled suspense-y thriller set in a small New England town. However, while reading this book, I couldn't stop grousing!

The novel opens dramatically: 'Nurse Spandex', a thirty-something nurse known for modifying her scrubs to make them more flattering, has just left after a fling with a doctor while on duty. Returning to the nursery, she's horrified to find a newborn baby missing, replaced with a massive corn snake. That frightening crime sets off a series of increasingly creepy and violent events in small town Brewster, a summer vacation town in Rhode Island, that culminates in a shocking and violent Halloween.

The cast is enormous. We've got an Iraq War vet-turned-cop with broken heart and a bad attitude, a flaky and inexperienced but deeply moral small town journalist slash single mother, a series of quirky and inventive ten year olds, a gaggle of local and state police with various tics and quirks to make them memorable (cop who hums opera, cop who can't stop eating, townie cop who is racist, etc.), spunky old ladies and degenerate young men.

Dobyns' writing style reminded me of Stephen King mixed with Michael Chabon, with a myopic focus on place and a strange almost meta-narrative style, excessively quirky characters propped up almost smugly, relentless action that was almost too much.

As a result -- and my biggest complaint while reading -- is that despite the page length (my copy clocked in at 420 pages), everyone actually felt really thin. We were given shorthand for the character, some trite, some original, and you could see a mile away the character interactions. Women, I think, suffered the most. All young women were sluts -- multiple people told us this -- and even those who weren't actively slutty were still irresponsible (our single mother refuses child support because she got herself pregnant, not her and the guy, but whatever.) The romantic building up is straight out of rom-com -- two angry confrontations lead our intrepid journalist to dream about the cop being stepfather to her song -- while the sex is straight out of a Clive Cussler.

I know, I sound super negative but, but, I couldn't put this book down. I really couldn't. I stayed up waaaaay later than I should to finish this, and it was worth it -- the mystery was satisfying, I guessed a few twists and not some others, and even the flimsy characters hooked themselves in me and didn't let go.

Bloggers who do the RIP reading challenge in October will absolutely want to add this to their TBRs; anyone who likes Stephen King will want to pick this up. (King writes a gushy, literally gushy, review for this book. It's adorable.)

I'm thrilled to offer a copy of The Burn Palace to one lucky reader! To enter, fill out this brief form. Open to US readers only, ends 2/15.
* book reviews * giveaways book rating - liked