The Sign of the Weeping Virgin by Alana White 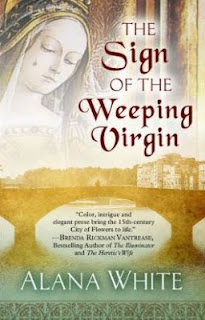 Title: The Sign of the Weeping Virgin
Author: Alana White

Rating: Okay.
Did I finish?: I did.
One-sentence summary: In 15th century Florence, a lawyer investigates the mystery of a missing girl, a weeping portrait, and Lorenzo de' Medici's declining popularity.
Reading Challenges: Historical Fiction

Do I like the cover?: I mostly do -- I like the Virgin Mary image and the Florentine landscape

Buy, Borrow, or Avoid?: Borrow or buy, especially if you love political intrigue and/or books set in Italy

Why did I get this book?: I like historicals with less trendy settings, and the Renaissance always interests me

Review: In classic 'it's-me-not-you', I just didn't quite get into this book. It's chock full of historical intrigue, some solid personalities, great sense of place, and a twisty plot that takes in politics, art, loyalty, and the Ottoman Turks -- but it and I didn't click for some reason.

Set in 1480, the story follows Guid'Antonio Vespucci and his nephew, Amerigo Vespucci (yeah, that one), as they return to Florence from a two year ambassadorship to France. Things in Florence are, to put it bluntly, not good: the Pope is gunning for Lorenzo de' Medici, who is the sort of unofficial head of Florence; a local beauty was allegedly kidnapped by roving Turks; a painting of the Virgin Mary has started crying; and Guid'Antonio's personal life is kind of a mess. Guid'Antonio is deeply loyal to Lorenzo de' Medici, even if most of the townspeople and even his own family are turning against the man. The city is in the grip of a famine, and the common people are getting angry. Lorenzo is being blamed for everything from the famine to the weeping painting, and Guid'Antonio is determined to clear Lorenzo's name.

For those who think historical fiction is just romance with corsets, White's novel will correct your misunderstanding. There's no romance to speak of, unless you count our hero's love for Florence and his patron/friend, Lorenzo de' Medici. (And by love, I'm being cutesy, there is no homoerotic longing happening.) In this novel, there's a metric ton of political machinations so those who enjoy political thrillers might like this unique take on corrupt politicians and dark, decadent, decaying urban locales.

I yearned for a cast list for this book, confusing my Antonio with my Amerigo, my Giuliano with my Giovanni. Cousins, brothers, kinsmen a-plenty. It took me a good ninety pages or so to really get into the story -- White crams a lot into the opening chapters to establish the setting of her story -- and other than Guid'Antonio, the rest of the characters aren't immediately notable. Guid'Antonio, however, was immensely interesting. He's complicated, to say the least: a bit cranky, obstinately loyal (to Lorenzo de' Medici, at least), dogged, lonely, confused.

I can't put my finger on my why I wasn't sucked into this book, but it wasn't for lack of trying on White's part. I plan to revisit this one in the future, perhaps when I'm less mushy-brained from winter. For those who like armchair escape, solid mysteries, and political intrigue -- this is your book!

I'm thrilled to offer a copy of The Sign of the Weeping Virgin to one lucky reader!