The Silence of Bonaventure Arrow by Rita Leganski 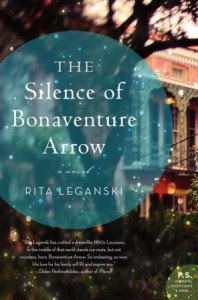 Rating: Liked a very good deal.
Did I finish?: Yes!
One-sentence summary: A boy, born mute in 1950s New Orleans, becomes the vessel through which is fractured loved ones find peace and happiness.

Do I like the cover?: I do, very much, but I do confuse the sparkles with snow, which doesn't work as this novel is set in New Orleans!

First line: Bonaventure Arrow didn't make a peep when he was born, and the doctor nearly took him for dead.

Buy, Borrow, or Avoid?: Borrow if you want an atmospheric Southern novel in the vein of Sarah Addison Allen.

Review: Set in New Orleans and surrounding areas from 1949 - 1957, this debut novel tells the story of one Bonaventure Arrow, his widowed mother Dancy, his grandmothers Letice and Adelaide, his dead father William, the local healer Trinidad, and a man known only as the Wanderer. (The cast might seem huge but actually it is super manageable and doesn't overwhelm.)

When the Wanderer inexplicably murders William, pregnant Dancy nearly dies from sadness, and in that moment her infant suddenly goes mute -- and develops a near supernatural sense of hearing. When born, baby Bonaventure remains mute and able to hear things no human can: the sounds of nature, the body, even his dead father in Almost-Heaven.  Challenged by the literal sounds of sadness in his life and the voice of William, Bonaventure is a vessel through which his fractured loved ones gain some measure of healing.

That description might sound a bit feel good-y and cloying, but the story doesn't feel that way. I was apprehensive about Lovely Bones-type treacle-y sentiment but the book steered pretty clear of that territory, too. This isn't quite Southern gothic nor is it magical realism, but it has elements of both in a delightful way. I laughed, I was caught up, I got teary, I was swayed.

Leganski's writing has a kind of oral cadence to it; not precisely like a story being told aloud, and certainly not affected, but with a kind of lilt or tumble that makes it feel almost alive. Nearly a character unto itself. It talks so Bonaventure doesn't have to and at least once a chapter, if not more, I found myself pausing to savor a turn of phrase or particularly catchy splash of words. The story isn't told exactly chronologically; as a character recalls something, or as the omniscient voice of the novel clues the reader in, Leganski drifts into that memory, scene, or moment. It perpetuates the state of fluid emotion, inserting some family saga-ish elements into this story of a mother and son, a bereaved lover, injured widows, the faithful and faithless.

Speaking of faith, I could almost argue this is an inspirational novel -- the spirituality of the characters fuels the story, and Leganski makes no bones about connecting Bonaventure's gift and the ineffable intelligence of the universe to a kind of God. She manages to keep that thread from becoming a blanket and I didn't mind the religiosity, implied or otherwise, in the narrative; and it fit for the place and time. (And as a smells-and-bells ex-Catholic, the emphasis on the saints totally charmed me, as did the mix of indigenous herbal magic with Catholicism.)

I inhaled this book in one night, wanting to see how the story concluded. Still, I felt aware I was reading a first novel -- at times it felt a leeeetle too long for me, like a novella that was padded into novel length -- and I couldn't shake the feeling that Trinidad was simply Bonaventure's 'Magical Negro'. (While she has a back story, she literally quits her job and packs up to move near to Bonaventure and waits until the Arrows hire her, and then she works as a housekeeper and cook until Bonaventure comes to her for 'hoodoo' magic, and after her magic saves the day, she gets a paragraph sum up and disappears from the story.)

A strong debut, high on ambiance and atmosphere, that reminded me of Sarah Addison Allen -- I think fans of her will enjoy this novel. It hits all the right emotions for someone who wants to be a little sad and a lot satisfied, and has some armchair time travel to boot. I'm looking forward to Leganski's next offering eagerly.

I'm thrilled to offer a copy of The Silence of Bonaventure Arrow to one lucky reader! To enter, fill out this brief form. Open to US/Canadian readers, ends 3/8.
* book reviews * giveaways book rating - liked