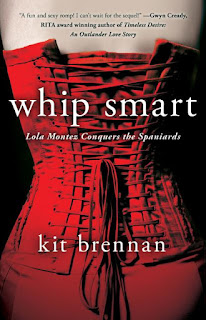 Rating: Liked a very good deal.
Did I finish?: I raced through this one!
One-sentence summary: The spicy, sexy, wild year in the life of Lola Montez, dancer and lady of danger.
Reading Challenges: E-book, Historical Fiction

Do I like the cover?: I'm of two minds -- it's certainly eye-catching but I don't think it reflects the 1840s fashion Lola Montez wore.

First line: "Tell us in your own words."

Buy, Borrow, or Avoid?: Borrow or buy if you love historical figures with chutzpah, zest, and a slightly overinflated sense of self.

Why did I get this book?: I'm a Lola Montez fangirl.

Review: Lola Montez was a 19th-century adventuress who started in the UK, traveled all over Europe -- at one point, as the mistress to a King! -- then Australia and the US. She was known for a scandalous dance of her own invention, her romantic escapades, and her liberal use of a whip.

In this novel, Brennan imagines the year when Eliza Rosanna Gilbert transformed herself into Lola Montez (what actually happened is fuzzy, so Brennan takes liberties, which she acknowledges in her Afterward).

In 1842, Rosanna -- as she prefers to be called -- is facing a divorce trial from her husband on grounds of infidelity (on her side, scandalously). Virtually penniless, she finds herself a patron, of sorts, and decides to take acting lessons, where she is introduced to Juan de Grimaldi, a dance master for the Spanish court.

The novel is written in Lola's voice, and like her life, the prose is breathless, dramatic, punctuated with exclamation points and a variety of oaths, curses, and wails. I found it playful ('“¡Fabulosa!” he’d squeak, and “¡Deliciosa!” I’d gasp back.', p26) and dramatically emotive as Lola punctuates her story with commentary and coy asides.

While reading, I was reminded a bit of Kage Baker and Carol K. Carr, with the mix of banter, snark, and history. There's a very earthy sense of sex and sexuality here -- not explicit, but obvious, if that makes sense -- and I found it hilariously fun.  There's a sense of heaving bosoms here, but not because Lola's met her One True Love -- no, Lola is on the run, working her wiles, and trying to come out on top.

I'm super excited for the sequel -- Whip Smart: Lola Montez and the Poisoned Nom de Plume -- because Brennan's Lola is a trip. For a wintry armchair escape to sunnier, sexier lands, this was perfect.