A Conspiracy of Alchemists by Liesel Schwarz 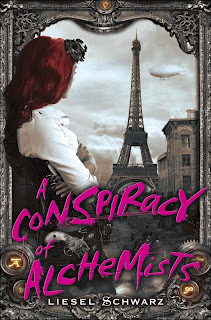 Rating: Liked.
Did I finish?: I did, fairly quickly!
One-sentence summary: A warlock, an absinthe fairy, and a lady dirigible pilot become embroiled in a dangerous war between dark magic circles and the mundane world.

Do I like the cover?: I do, mostly -- I hate that '80s-esque neon pink graffiti scribble at the bottom -- otherwise, it doesn't offend.

First line: This was the place where people came to give their souls to fairies.

Buy, Borrow, or Avoid?: Borrow if you like the ambiance of steampunk, alterna-historical settings, and corsets.

Why did I get this book?: I'm totally a sucker for steampunk.

Review: Set in 1903, this steampunk-flavored historical fantasy follows Miss Eleanor "Elle" Chance, a woman of good breeding and some social standing, who became a dirigible pilot against her father's wishes. Elle has her own dirigible and some sketchy clients, and at the novel's open, she's in Paris to make a very shady delivery: human cargo. Uneasy, Elle's apprehension only worsens when an absinthe fairy hides in her diamond bracelet (Elle's preferred form of payment), and as she leaves for the airfield, she's jumped by thugs.

Things get very hairy after this. Her father is kidnapped, she sets off on a gyrocopter trip across the Continent, develops a crush on her human cargo (it doesn't help he's a hundred year old heartthrob of a Warlock, and Lord to boot!), learns a shocker of a secret about herself and her family history, and has further adventures on the Orient Express.

There's a supernatural element that goes hand-in-hand with the novel's alterna-history setting: the non-magic 'Light' world lives in tense balance with the paranormal 'Shadow' world .  In the course of the novel, Elle discovers she -- and her family -- are rather at the center of that struggle, forcing her to reconsider everything she's taken as fact.

This was a wonderfully fluffy read with a strong romance novel arc for Elle and our agéd Warlock (which I really liked).  The steampunk flavor and paranormal world-building was enough to give me a sense of the world without making me feel mired, but detail geeks might feel things are thin.  For the most part, I enjoyed the characters, but I will say I found the secondary characters a little more robust than Elle. There was even a vampire character I liked! (I wouldn't mind a novel about her.)  A tertiary character, this vampire was a train companion who makes a throwaway comment about her uncle's unseemly infatuation with a barrister's wife in Whitby, followed by an eye roll and "Men," which had me rolling out my bed with laughter.

I had a great time with this book although I will admit it's a bit uneven in places. I liked Elle for the most part, but as with so many novels dependent on a truly charismatic heroine, Elle felt a bit flat. And to be fair, creating a Victorian heroine of breeding who is both reasonably independent and not a caricatured comic book super heroine is tough -- there needs to be a balance of vulnerable and bold, a nod to social mores and values, and a believable sense of what said heroine can withstand. Additionally, Elle is saddled with the burden of being one of those gamechanging VIPs, and unfortunately, her personality was just a tad too flat for me to totally buy her as the epic heroine but I'm hopeful Schwarz can flesh her out more in future books.

I was strongly reminded of Gail Carriger's Parasol Protectorate books with this one; while Carriger's novels lean more toward comedic, both have similar elements -- conspiracy, secret cabals, Italy, supernatural romance -- but this one leans more toward adventure rather than comedy of manners.

I understand this is the first in a series; the novel ends satisfactorily for those who don't want to add a new series to their queue, and I'm looking forward to seeing how Schwarz unfolds Elle's story.

I'm thrilled to offer a copy of A Conspiracy of Alchemists to one lucky reader!  To enter, fill out this brief form!  Open to US/Canadian readers, ends 4/5.  For another entry, check out my interview with Liesel Schwarz.