Children of Liberty by Paullina Simons 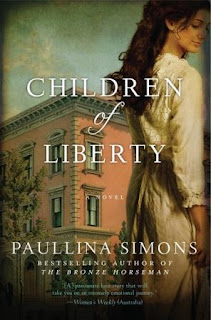 Rating: Meh.
Did I finish?: I did not -- I stopped at 104 pages.
One-sentence summary: The story of a Sicilian immigrant, Gina, and a Boston brahmin, Harry, in 1899 Boston.
Reading Challenges: Historical Fiction, Immigrant Stories

Do I like the cover?: I do -- although it evokes Colonial fiction for me rather than turn-of-the-20th-century.

First line: There had been a fire at Ellis Island the year before Gina came to America with her mother and brother in 1899, and so instead of arriving at the Port of New York, they had set sail into the Port of Boston.

Why did I get this book?: So many people raved about Simons' other books.

Review: From the first line, I knew this wasn't my book. Tell-not-show is my reader-ly pet peeve, especially in historical fiction, and the opening chapters felt heavy with telling. I ended up DNFing this book at 104 pages as I just couldn't stand Simons' writing style.

Set in 1899, Sicilian Gina -- on the cusp of turning 15 -- emigrates to the US with her mother and older brother. Upon landing in Boston, they meet Harry Barrington and Ben Shaw, Boston brahmins who manage apartments for newly arrived immigrants (they're the nicest slumlords in history). Ben is hot for Gina, but we the reader know Harry secretly wants her, five year age difference, economic status, and cultural backgrounds be damned. (Also, this is a prequel to Simons' wildly popular Tatiana and Alexander books, featuring Alexander's parents. Even without having read those three books, I had a hunch where this was going.)

Actually, I can't say for certain that's what happened, having stopped just one hundred pages in, but Simons isn't subtle with her set up nor the way she unfolds the story. Gina is childish but winsome, exaggeratedly naive and yet unconsciously sexual; she skips up church stairs but also rebelliously unpins her hair during a candlelit dinner with the two strange men she just met. She's a sweet, naive 14 year old who relishes rendering men speechless.

Ben Shaw is related to Robert Gould Shaw, and for any reader who doesn't know who he is, Simons stops just short of describing him as Matthew Broderick in Glory. Harry Barrington (who, I admit, I kept calling Harry Barry in my head) is cold and bemused and aloof, unimpressed with Ben's hot interest in Gina, telegraphing to all their eventual getting together-ness.

Simons infodumps by having Ben and Harry do this frenetic bantering thing -- which was exhausting -- but Gina finds it delightful, of course.  It gave great historical context to early 20th century Boston, but it felt so unnatural and forced, I couldn't shake the feeling of getting a lecture.

In addition to the characters, I found Simons' writing style to be off-putting: she has this weird joke-y commentary thing going on with Harry's scenes, while we're omniscient third person with Gina. From a dinner with Harry and company:


"...The bananas need to be collected, appraised, counted, packaged and crated. Someone has to do all this."

"And someone has to make the crates," Herman said, seeing the nails because all he carried was a hammer.

"First they have to procure the lumber to make the crates," Orville cut in, seeing the nails because all he carried was a hammer.

"Absolutely," Ben agreed, who carried a number of tools with him. (p71)

And from the aforementioned candlelit dinner with Gina, her brother, and Ben and Harry:


He kicked the chair again, harder. She looked over at him. What, she mouthed with irritation. He gestured to her hair with his eyes.

You want me to tie up my hair, she rhetorically mutely asked him. Fine, here you go. Raising her hands to her head, she pulled out all the pins and laid them on the table, in front of her plate. ... (p37)

I will say, she makes her characters big and bold and strong, and if you like those flavors in your fiction, you might enjoy this one.  For me, everyone grated, so much so, that by page 64 I was counting down those last forty as I worked my way to one hundred.

Be sure to check out the other blogs on the tour as folks loved this book way more than I, and Simons has a huge fanbase.  This one just didn't hit me the right way, but doesn't mean it won't strike you just fine!

I'm thrilled to offer a copy of Children of Liberty to one lucky reader; to enter, fill out this brief form. Open to US/Canadian readers, ends 3/15.
* book reviews * giveaways book rating - unfinished