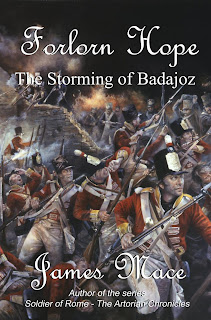 Rating: Liked.
Did I finish?: I did!
One-sentence summary: The days surrounding the 1812 assault on Badajoz, Spain.
Reading Challenges: E-book, Historical Fiction

Do I like the cover?: I do -- it's an original painting by a contemporary artist of the Badajoz invasion.

First line: It was a hateful task for a British infantryman.

Buy, Borrow, or Avoid?: Borrow or buy, especially those who enjoy military fiction.

Why did I get this book?: I was intrigued by the premise and its connection with I Stood With Wellington.

Set in 1812, Mace takes the reader into the siege of a Spanish fortress, focusing on the group of soldiers known as the 'Forlorn Hope' -- the first wave of attackers expected to die, meant only to pave the way for further assault. Mixing gritty details and cinematic elements in his combat scenes with a focus on a few individuals -- both French and British -- Mace hooked me on this story.

I'm not typically a reader of combat/military fiction, but this is a story of soldiers -- good, bad and everything in between -- and the military culture of 19th century armies. From the 'ranks' to the officers, we're given glimpses of the snobbery, prejudices, and camaraderie common in the time.

Mace builds tension methodically, ticking away the hours to the siege, introducing us to some of the men participating. A young officer volunteers impetuously, aching at the sudden death of his wife. When the breach is delayed, he finds himself less certain about his decision but is committed nonetheless.  A young raconteur fears he'll die without knowing love; a terminally ill man chooses this death over a more protracted one.

Even though I technically 'knew' what happened at Badajoz from characters referencing it in I Stood With Wellington, I was still glued to this book. It was quite a nail-biter, shockingly gory at moments (but not gratuitously), and thankfully ended beyond the last moments of Badajoz.

As with I Stood With Wellington, Mace's Notes are fascinating to read. Again sharing his goals and desires in writing this novella, he also reflects on his sources and the historical and fictional characters featured.

At about 100 pages, this was a zippy read, a wonderful introduction to Mace's writing style and a good dip into a historical novel that mixes well military and combat narrative with character-driven plot.
* book reviews book rating - liked