I Stood With Wellington by James Mace 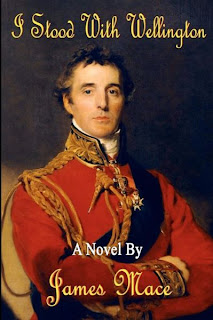 Rating: Liked a good deal.
Did I finish?: I did!
One-sentence summary: An account of two military geniuses -- Wellington and Napoleon -- and the soldiers who fought with them in the skirmishes leading up to Waterloo.
Reading Challenges: E-book, Historical Fiction

Why did I get this book?: I enjoy novels featuring Napoleon -- Georgette Heyer, Sandra Gulland -- but haven't read any that deal strictly with the battles he led, and was curious.

Review: I'm not a Napoleon fangirl but I love novels set during his time. I cut my teeth on Georgette Heyer and the Georgian-era is still a favorite. And while I like books set during wartime, I'm not really drawn to the combat narrative -- I like stories about those at home -- but recently, I've found that novels set squarely in the battlefield have been engaging and this book is no exception.

Opening in 1814, Mace drops us in the middle of a violent skirmish in Toulouse, France, in which famed British military hero, the Duke of Wellington, is driving back Napoleon's armies. Alternating between French and British viewpoints, Mace sets up a rather complicated back story fairly easily, contexting the conflict that just happened and establishing what's to come. It took me about two chapters to get totally up to speed, I admit, but by the third chapter, I was hooked. As the European powers wage peace, Napoleon frets in exile, and it is only a matter of time before he returns to Europe to take back France, an invasion that culminates in the Battle of Waterloo.

Mace weaves these bursts of conflict in with a few character-driven threads (or perhaps the other way around) and as a result, I was caught up in the drama of both 'what will Napoleon do next??' and 'I hope that sweet British widower will remarry that nice Englishwoman!'. Reminiscent of Heyer, Mace's novel touches upon the rigid class stratification in the British Army, the societal changes happening in the world around them, and the shocking reality of life for a 19th century soldier. Being the opposite of a war buff, I wouldn't know my bayonet from my ... some other 'b' term, but Mace peppers the narrative with tidbits and hints to help the reader envision the scene and understand what is going on.

What really impressed me -- because I love it when done well -- is that Mace balances a light touch (hints of a courtship between two characters) with a darker one (the behavior of the 'good guys' during a particularly hellish combat moment). In his 'Final Thoughts' (more on that later), he reveals he strove to create some ambiguity about who were the 'good guys' and 'bad guys', and he nailed it: I was for the British and French constantly.

This particular edition was a treat to read, an enhanced e-book loaded with extras. The novel clocks in at about 480 pages with a rich collection of appendices to answer any armchair historian's questions, from a detailed list of military ranks with explanation, a historical afterward that shares the fate of the major historical players, and perhaps my favorite section, an annotated list of what historical regiments from this novel still exist and in what form. The book is peppered with illustrations -- either historical or contemporary renditions of the events at the time -- which I loved and appreciated.

Mace's 'Final Thoughts', in which he shares his thoughts on writing this novel, was a pleasure to read. I love reading about the craft of writing as much as the actual product and Mace echoes that refrain I've heard from other historical novelists, a desire to balance accuracy with entertainment.

You can read a preview chapter at the publisher website to get a sense of Mace's style but I will again mention it took me two chapters -- and was worth it. A wonderfully rich and detailed chunkster for those who like Georgian-era historical fiction, war stories, or the Franco/Anglo divide.
* book reviews book rating - liked