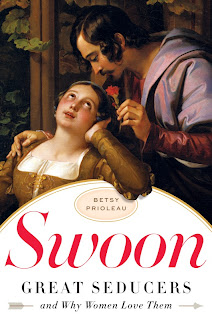 Rating: Liked.
Did I finish?: I did!
One-sentence summary: A non-fiction survey into the world of the seducer -- historical ladies men and why they're so appealing!

Do I like the cover?: I do --with that swoon-y image and fat, silly font, I'm completely seduced. (Ha, play with words!)

First line: Pembroke, a hamlet once known as Scuffletown (population 2,800), sits in the southeastern flatlands of North Carolina on Highway 711 -- home to the University of Nor Carolina Braves, the Lumbee Indians, the Berea Baptist Church, Dollar Tree, Papa Bill's Ribs, a nearby drag strip with wheelstanding contests, and one of today's hottest ladies' men.

Buy, Borrow, or Avoid?: Borrow if you like popular non-fiction on sex, psychology, and human behavior.

Why did I get this book?: I love me a good lover!

Review: I will admit, as a lesbian, I am probably not the best person to appreciate the sexual allure of men. (I did go through a phase in college in which I experimented with men, but it only lasted about two semesters and was done, in part, so I could claim that oh-so-important-when-in-college 'bi' label.) Still, as one who nurtures many a literary crush, male and female, I was drawn to this non-fiction survey of historical seducers and contemporary ladies men.

Prioleau opens the book by articulating who a seducer -- a ladies man -- is and isn't. He isn't, thankfully, the professional Pick Up Artist (PUA), trained via offensive online courses on how put down a woman in such a way she'll consent to sex. The true ladies man, Prioleau argues, loves women, admires women, respects women. (I might also venture, based on her examples, the true ladies man is also not wired for monogamy, although some recent books on sex and evolution suggest we all aren't.)

The basis of her argument comes from historical lovers of fame and good repute, supplemented by interviews with everyday ladies men (more on that bit later). From that, she builds an inventory of qualities a successful seducer possesses. By no means is this a scientific study but I found it thought-provoking and amusing. Prioleau begins many a section with 'According to studies, women prefer...' and rattles off THE attribute science says women say they want in a man: creativity, intellect, a physical or emotional impediment like a scar or crippling depression, courage, virtue, élan, etc. (All I took from these chapters is that what strikes a woman as seductive varies by the woman!)

Prioleau punctuated her argument with tidbits about historical figures or quotes from romance novels. She focused on a set of historical and/or celebrity ladies men to illustrate her points -- Casanova, Byron, Liszt, Gabriele D'Annunzio, Porfirio Rubirosa, and Warren Beatty are a few -- as well as various deities and myths from around the world. She also uses real-life examples in her narrative, non-celebrity men she's somehow identified as being contemporary seducers and ladies men. I'll admit, I found all those sections super odd: she interviews some guy about why he's great with women (the reply is usually 'I don't know, I just am') and a few of his lovers (anonymously).

There are sixteen pages of black and white photos of many of the seducers Prioleau mentions, which confirmed her assertion that a successful seducer need not be all that stereotypically handsome.

Ultimately, what behavior one finds sexy rather than creepy is a matter of personal taste, the situation/setting, that kind of thing, so I often found some of Prioleau's examples the opposite of appealing, but just as often, she articulated why I find a historical figure just so damned dashing.

This is an unabashed heterosexual survey with Western heteronormative assumptions about sex and relationships so those of you looking for a nuanced study won't find that here. But as a springboard and conversation starter -- might be a good companion book for a book club or reading group -- this one hits the mark -- I've been shoving it at people all around me and yammering about Prioleau's assertions and ideas.  Those who enjoy popular non-fiction on sex, society, and human behavior will likely dig this one!

I'm thrilled to offer a copy of Swoon to one lucky reader. To enter, fill out this brief form. Open to US/Canadian readers, ends 4/5.