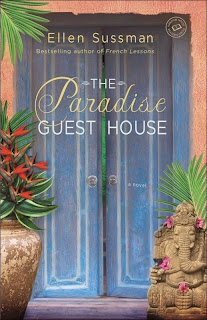 Rating: Liked!
Did I finish?: I did.
One-sentence summary: Two Americans who survived the 2002 Bali terrorist bombings struggle to move on after the terrifying event.

Do I like the cover?: Eh -- it's pretty enough, but doesn't capture the story, I think.

Buy, Borrow, or Avoid?: Borrow if you like chick lit that pays attention to current events or if you like movies in the vein of Beyond Rangoon and The Impossible.

Why did I get this book?: I liked Sussman's French Lessons when I read a few years ago; was curious to see how she handled a terrorist attack!

Review: I'm not sure how to describe this book exactly: it's a beach-y romance at heart (literally featuring Bali's gorgeous beaches) featuring a hero and heroine damaged by loss and pain, set during and immediately after the October 12, 2002 terrorist bombings in Bali. I described this to a friend like chick lit for those who know a little about current events; it's emotional and weighty, but not crushingly so, punctuated with some sweet levity.

The novel opens a year after the bombings, but flashes back to those days in 2002 just before and after the bombing. Hero and heroine are thrown together under the gruesomest of circumstances, two people injured long before getting wounded in Bali.

Our heroine, Jamie, a 30ish American, is an adventure guide for a Berkeley company, and she pursues her highs -- sex, adrenalin, fun -- relentlessly. Three days into her trip in Bali, she walks into a club just moments before the first bomb goes off and is seriously injured. Our hero, Gabe, is a 40ish American, an ex-pat teaching at a Balinese school who fled the US after a personal tragedy. Gabe is having dinner with a friend when the bombs go off; he stumbles over Jamie and pulls her to safety.  In the resulting tumult, Gabe cares for Jamie until her emergency flight to the U.S. and out of that develops something sweet, sad, and confusing.

Although this is a story of ex-pats, Sussman doesn't ignore the Balinese victims and survivors, and in fact, articulates some of the anger and rage felt by Balinese when the (white) foreign tourists received priority medical treatment over native Balinese.  I was grateful for that awareness and balance.

I confess I teared up constantly while reading this book. It's not cloyingly sad or agonizingly miserable; Sussman conveys huge emotions neatly and carefully, respectfully.  As with Sussman's other book, French Lessons, I wasn't sure how she would tie things up in the end, but what results is refreshingly real.

The jacket blurb says this is for readers who liked Elizabeth Gilbert’s Eat, Pray, Love and Alex Garland’s The Beach.  I suppose it has the redemption and love found in Eat, Pray, Love but other than ex-pats and ocean, I don't see the comparison to The Beach.  If you like movies in the vein of Beyond Rangoon and The Impossible, you'll like this book, I think.

I'm thrilled to offer a copy of The Paradise Guest House to one lucky reader! To enter, fill out this brief form. Open to US/Canadian readers, ends 4/12.