A Rip in the Veil by Anna Belfrage 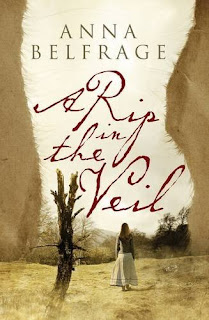 Title: A Rip in the Veil
Author: Anna Belfrage

Rating: Liked.
Did I finish?: I did!
One-sentence summary: A contemporary computer programmer finds herself in 17th century Scotland, fighting for her life, while her family tries to solve the mystery of her disappearance.
Reading Challenges: E-book, Historical Fiction

Do... I love the extras the author offers?: YES. The author does profiles of both Alex and Matthew, in which she interviews her characters, and I found it silly and fun.

Buy, Borrow, or Avoid?: Borrow or buy if you like time travel and 17th century Scotland -- both this book and the sequel are under $4 as e-books.

Why did I get this book?: I agreed to review the second novel, Like Chaff in the Wind.

Review: Though the blurb for this book implies the novel is solely about our time traveling heroine and her amour, I actually found this to be a plot-and-character heavy action romance set in Scotland, about family, obligation, betrayal, disappointment, and resilience.

Alex Lind is a programmer, taking a shortcut to a business meeting through the Scottish moors when her BMW craps out. She gets out of her car to see what her options might be when a kind of storm springs up. She's struck by lightning and pulled through a hole in the earth -- and wakes up in 1658. There, she meets Matthew Graham, an escaped convict (thankfully not a murderer or rapist), who takes care of Alex. She's seriously injured from her fall, and moors are filled with danger.

Back in contemporary Scotland, her boyfriend and colleagues search frantically for Alex, confused and worried since Alex had mysterious disappeared some years before -- a disappearance that resulted in her young son. Additionally, a mysterious robber keeps trying to steal something from Alex's father, and a client of Alex's has an angry -- and violent -- fascination with her and her family.

This is not your standard time-slip story, where our heroine goes back in time and mucks through it (I'm thinking Outlander, and this book does beg comparison with Gabaldon's novel. However, other than time travel and Scotland, the two aren't similar. There's certainly a strong romantic element as well as the inevitable acceptance of historical patriarchal attitudes about women but the heroine, hero, and plot threads are different.). Belfrage introduces a magical world system of 'time nodes', a family of time-travelers, artists, and scientists trying to control this power. Alex's mother is a complicated woman with a complicated history, and as Alex's contemporary family and friends try to find her, a greater mystery emerges.

Time slip historical fiction -- novels in which contemporary people travel back in time -- are a bit like backpacking to me: I love the idea, but I don't like the work. The inevitable modern-person-responding-to-the-past/historical-person-responding-to-the-interloper thing exhausts me -- it needs to feel real but can't dominate the whole book. In this case, I thought Belfrage handled the present-to-past thing well -- her characters were in shock, talked about it, disbelieved, and eventually moved on in a reasonable amount of time. (Belfrage's jump to sex between her hero and heroine, on the other hand, felt a bit rushed to me, as did our heroine's ease with which she moved on from her son.)

This book was fun but not without a few problems for me. The writing was a tiny bit clunky at times and Belfrage jumped between multiple points-of-view in a single paragraph, which I found jarring. The start of the book literally plunges you in and it took me some time to make sense of all the players but by 60 pages, I had a sense of the story and didn't want to stop reading. While there were some inconsistencies with Alex throughout the novel in terms of behavior and attitudes, I gave it a pass because people are inconsistent and I didn't mind the story.

Overall, a fun action-y novel with some interesting magical-ish world building. Recommended for folks who want a little fluff, a little history, and a lot of sexytimes. While there is a sequel, the novel ends satisfactorily so cliff-hangers -- but if you want more, there's a sequel and Belfrage is working on a third book in the series.
* book reviews book rating - liked