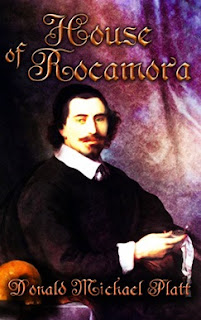 Do I like the cover?: Not really, although with the Dutch setting, it has a kind of Vermeer-y look to it that I like!

Why did I get this book?: The setting was unique, and I'd read the first one!

Review: This book is the sequel to Rocamora, a beefy historical novel following Isaac Vicente de Rocamora. Continuing the tale of real-life Dominican-priest-turned-Jewish-physician, Platt's book again delves deeply into 17th century life, this time focusing on Jewish communities in Amsterdam rather than the grim drama of the Spanish court.

I preferred this book to the first one, perhaps because of the more domestic focus. Vicente -- now Isaac -- is settling in his new home as a Jewish man, honoring his family's history in a way he couldn't while in Spain.

The reader follows Vicente through his education -- a bit of a crash course, as he's in his 40s and spent a good deal of his life absorbing Catholic doctrine -- and his courtship with the young, beautiful Abigail. A man who has run through a number of passionate, beautiful lovers, Isaac's focus on his family and his community is a refreshing change from the blood, guts, gore, and court intrigue found in Rocamora -- a shift seemingly so absurd I wouldn't believe it were it not based in fact!

As with his first book, Platt's meticulous research is clear and I found the historical details fascinating. Jewish culture and community in this era wasn't homogenized -- as with any broad denomination, there are various factions and levels of conservatism -- and Platt lightly touches upon the prejudices and tensions between these smaller groups.

Where Rocamora had plot so rich it dripped off the page, House of Rocamora is a quieter, slower novel, focused more on the man rather than the man's actions. I preferred this shift and enjoyed watching the man of action settle into life as a community leader, as a husband and father, and later, as a widower.

By the end of the novel, the story shifts to one of Isaac's children, and as with the first book, I found the ending could both be satisfying and a cliff-hanger, depending on your mood!

This edition has some lovely extras to help the reader: a map, a preface to set the mood and place, and information about the cost of living in the area -- helpful in evoking and imagining life there!