A Constellation of Vital Phenomena by Anthony Marra 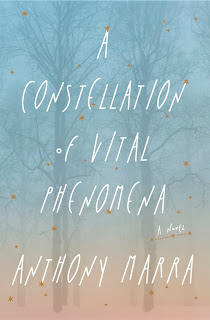 Rating: Liked a good deal.
Did I finish?: I did.
One-sentence summary: Six lives overlap, collide, and crash over a span of a decade, distilled down into five days in war-torn Chechnya.

Do I like the cover?: I adore it -- so sad, so evocative, so bittersweet!

First line: On the morning after the Feds burned down her house and took her father, Havaa woke from dreams of sea anemones.

Buy, Borrow, or Avoid?: Borrow or buy -- I suspect this book will be getting a good deal of praise in the coming months.

Why did I get this book?: If it's from Hogarth, I'm reading it.

Review: I'm a total Hogarth fangirl now, having first fallen in love with I Am Forbidden and then The Headmaster's Wager.

Set in a small town in the Chechan Republic, the novel takes place over five days, shifting from 'present' -- 2004 -- back to 1994.  (The time jumps are beautiful noted at the start of each chapter with this timeline, the year in question bolded.)

The five days in question, the frame of the book, refer to the time spent at a nearly abandoned hospital by Akhmed, an incompetent village doctor, and Havaa, the 8-year old daughter of his neighbor, orphaned after Federal police seized her father and burned her house. Desperate to save her, Akhmed drags her to the city hospital (at one point in the book, he realizes it is the first life he's saved as a doctor).

There they meet Sonja and her crazy nurse. Sonja, paralysed with guilt and fear over her sister Natasha, missing again after being a victim of sex trafficking, works automaton-like numbness at the hospital, amputating limbs with quick practice and dealing with gangsters to resupply the hospital.

Every night, Akhmed returns home to care for his invalid wife, living in fear of his neighbor Ramzan, who is a snitch for the police (Ramzan is the reason Havaa and her father were turned in to the police) while nurturing a friendship with Khassan, Ramzan's historian father who has taken to ignoring his son as punishment for his betrayals.

Marra's writing is gorgeous, not quite poetry, not simple statement, and as a result, whatever he articulates, be it a broken heart or severed limb, reads achingly real. (Which isn't to say it's all lofty philosophy: there are some literally stomach-turning, had-to-put-the-book-down-and-walk-away graphic or grotesque moments, like the aforementioned amputation scene.)  That said, I couldn't stop reading -- or wanting to read -- this book, and Marra's inclusion of such violence emphasizes the unstable destruction of the area, the unceasing  horror these characters live with.

Much like the old medical text that inspired the title, the characters are all points on a constellation, connected and separate.  I finished this book unwilling to start another, still working at the story in my mind.

I'm thrilled to offer a copy of A Constellation of Vital Phenomena to one lucky reader! To enter, fill out this brief form. Open to US/Canadian readers, ends 5/24.