A Dual Inheritance by Joanna Hershon 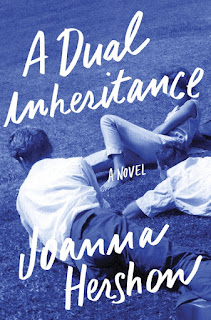 Do I like the cover?: Yeah, I guess -- for a book that covers four decades, it would be hard to nail down a single image to convey that scope. The three figures certainly hit the vague sort of triangle of the plot, but I wouldn't say that triangle is the primary thrust of the story -- and they were never this bucolic or pretty.

First line: Had he described Hugh Shipley at all over the past three years, approachable would not have been a word he'd ever have used.

Buy, Borrow, or Avoid?: Borrow or buy, especially if you like character-oriented novels about marriage, loyalty, and friendship.

Why did I get this book?: I'd heard good things about Hershon's previous novels and loved the premise and time span.

Review: I'm shocked I haven't heard more about this book already -- it has a kind of gossip-y, tawdry soap opera-y feel (marriage, divorce, adultery, social justice, social class) that makes it approachable with a sort of artsy writing style (not quite dreamy but not quite direct, omniscient, nearly 'literary'). It's being compared to The Marriage Plot, which sounds right -- Hershon's writing style reminded me of Eugenides' The Virgin Suicides.

Spanning 1962 through to 2010, this is a family saga, two friends and their families, the inevitable run of their lives. Opening at Harvard University in the early 1960s, the story follows Ed Cantowitz, a Jewish man from a working class family, ambitious and self-conscious, who abruptly, aggressively, and doggedly becomes friends with Hugh Shipley, a wealthy Boston blueblood.

For reasons both obvious and unlikely, the two become fast friends until they abruptly break contact -- ostensibly over politics but the reality is far crueler. Ed pursues wealth with the same hunger and drive as he did his friendship and studies, and finds his place in 1980s Wall Street as Hugh finds himself doing international aid work.

Both marry, have children, and their daughters -- Ed's Rebecca and Hugh's Vivi -- become friends when they meet at boarding school. Through their friendship, the families remain entwined -- occasionally embroiled -- in each others lives.

Vaguely, I had thought this book was going to be one giant extended look at the love triangle, and I was dreading it some.  It's nothing of the sort: while sexual and romantic entanglements make up a large part of the story, the novel is really about friendship and loyalty, love and betrayal.  It's about the times, too -- the 1960s and the 1980s -- and the mores of the last four decades.

No one is truly good or bad.  At times, I hated this book -- I hated the characters and what they were doing -- and other times, I couldn't stop reading if my life depended on it. (Or, say, sleeping or eating.) I really went through the wringer with it, too: Ed's daughter Rebecca is infatuated with Hugh, the father of her best friend, and Hugh has become a rather shameless philander. Ed's relentless drive for what he wants, at the expense of everything, is horrifying -- yet his desire to better and improve himself and his life is the cornerstone of American life. Hershon remains nonjudgmental about her character and their choices, leaving the reader to decide -- and in the end, I really kind of felt for everyone.

I will admit to some confusion at times; Hershon's writing style isn't direct. She comes at the story sideways, and I'd often go back to reread a previous chapter because I felt I had missed a detail or hint. At the end of the book, I think I got it all -- I'm certainly satisfied -- but I still can't decide if the ending was happy or sad.

Fans of character studies will like this one; it's a smart beach read for those who want a tiny bit of challenge. (It's also a chunkster at 496 pages!) It's a novel of New York City and New England, of social class -- so those who enjoy the Downton Abbey-ish look at the rich and not rich might enjoy the similar themes here -- and a snapshot of the last forty years or so.

I'm thrilled to offer a copy of A Dual Inheritance to one lucky reader! To enter, fill out this brief form. Open to US readers only, ends 6/14.
* book reviews * giveaways book rating - liked