- May 21, 2013
Yesterday I reviewed David Morrell's wonderfully grim, deliciously dark Murder as a Fine Art.  I'm excited to share my interview with Morrell, who reveals, among other tidbits, that he's working on a sequel to Murder as a Fine Art! (I am so excited.)  Read on to learn more about him, his writing, and this great novel, and don't forget to enter the giveaway!

My debut novel, published in 1972, was First Blood, the novel in which Rambo appeared. It’s an anti-war novel about the damage done to a man who was sent to war and discovered that he had a skill for killing, hating himself in the process. Ten years later, the film adaptation appeared, which follows the plot of my novel for the most part but reinterprets the story. It’s an odd feeling to be associated with a character that’s among the top five in the thriller world, using the criterion of characters who started in novels and then gained worldwide recognition through their film adaptations: Sherlock Holmes, Tarzan, James Bond, Rambo, and Harry Potter. This is my forty-first year as a publisher author, an eternity in the publishing world where most careers last 15 or 20 years. I think the reason I’m still here is that I keep trying to find new ways to extend the idea of what a thriller can be.

I work from 8:30 to 5, with an hour for exercise in the middle of the day. Exercise is important because I sit for so many hours. I write five pages each day and print them out. In the morning, I read those printed pages in a place that is different from where I write. Then I type corrections into the digital version and write another five pages, printing them out at the end of the day. This process gives me a fresh perspective on the previous day’s work. 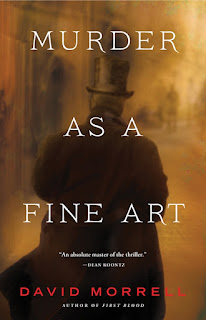 Was Murder as a Fine Art the original title of your book?

Yes, Murder as a Fine Art was the original title. In 1854, my main character, Thomas De Quincey, invented the true-crime genre in the third installment of his essay, “On Murder Considered as One of the Fine Arts.” My novel is based on the notorious Ratcliffe Highway murders that De Quincey wrote about in his essay. I knew that my title would need to echo De Quincey’s title.

As you were writing Murder as a Fine Art, was there a particular scene or character that surprised you?

Although Murder as a Fine Art is a Victorian mystery/thriller, it is also a father/daughter story. In 1854, when the novel occurs, De Quincey was 69. His 21-year-old daughter, Emily, was his companion. The more I researched Emily’s relationship with her controversial father, the more fascinating she became to me. When I introduced her about 40 pages into the novel, I suddenly had the idea of having her speak to the reader via a journal (a common device in Victorian literature). I started the journal with this sentence. “This morning, I discovered Father again pacing the back courtyard.” Really, it was as if Emily were talking to me. With her bloomer dress and independent ways, she took over every scene in which she appeared and is the character that readers most ask about.

To research aerial scenes in my novel about the mysterious Marfa lights of west Texas, The Shimmer, I became a private pilot. I try to spend once a week in the air. I enjoy hiking and swimming and am also an avid vegetable gardener.

I tend to read a lot of non-fiction because the style of some novels can get into my head and affect the tone of the fiction I’m working on. In my recent reading, I was impressed by Glenn Frankel’s The Searchers: The Making of an American Legend. Frankel discusses the Indian abduction of Cynthia Parker in 1836 and the many ways that the abduction and the search for her was recounted, especially in Alan LeMay’s novel, The Searchers, and John Ford’s film adaptation of it. The book is a fascinating blend of historical and cultural analysis. Otherwise, I’m continuing my research into Victorian London in the 1850s for a sequel to Murder as Fine Art. In both novels, my goal is to convince readers that they are actually in Victorian London.

I'm thrilled to offer a copy of Murder as a Fine Art to one lucky reader! To enter, fill out this brief form. Open to US readers only, ends 6/7.