May 25, 2013
Last year I read Jennie Fields' The Age of Desire, a historical novel about Edith Wharton's late-in-life love affair. It was a fantastic book not just at the famous author but at friendships that bridge social classes, the destructive joy of desire, and Paris in the early 20th century. Read on to learn more about Fields' novel and be sure to enter the giveaway!

I wrote a 'novel' when I was six called Emmy. It was about a poor girl who lived in a tenement played in the alley behind her house. I grew up in little tudor house in a leafy suburb. I knew nothing about alleys. But I was enamored with a children’s book called “Twig” and I did my best to imitate it.

I make a cup of tea about two p.m., read fiction for about a half hour and then start writing. By reading before I write, I come to the page as a reader, and it seems to help control the inner-editor in me who says things like, “You call this writing? This is utter rubbish.”

Was The Age of Desire the original title of your book? 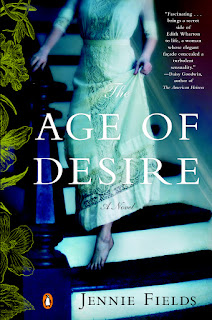 Awesome question! Actually, the original title was The Age of Ecstasy, but my publisher said it sounded like the drug ecstasy, and therefore the “Age of Ecstasy” would have been the 1990’s.

As you were writing The Age of Desire, was there a particular scene or character that surprised you?

That’s another great question, because I do often find that my characters do things that I never planned. Are you a fiction writer yourself and that’s how you know that? I was surprised by the fact that Carl Snyder (a minor character) was drawn to Edith the summer after her affair with Morton began. I do think people in love give off a certain frisson that draws people in. I noted in Edith’s diary that summer, she said Carl Snyder interested her more and more. I found that curious.

I love to walk, and I love to knit. I walk from four to five miles a day with my puppy, Violet Jane. And I knit every single day. To me, there’s nothing more relaxing. I also cook. Here in the South, I grill all year round. Simple, healthy food like grilled ginger trout, and comfort food like carrot cilantro soup and coq au vin are my specialties.

Recently, I’ve really enjoyed The Chaperone by Laura Moriarty, Flight Behavior by Barbara Kingsolver, and Gilded Age by Claire McMillan. Interesting. All by women. I guess I do gravitate to books by women, although, of course, I do read male authors as well.

I'm thrilled to offer a copy of The Age of Desire to one lucky reader! To enter, fill out this brief form. Open to US readers only, ends 6/7.
* giveaways * interviews