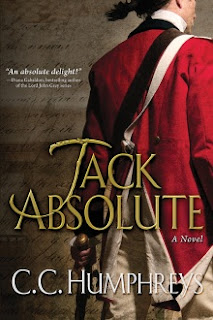 Rating: Liked a great deal -- practically loved.
Did I finish?: Oh yes, in just two days.
One-sentence summary: Former soldier Jack Absolute returns to the British Army and finds himself embroiled in a love affair, tangling with a secret society, and spying for the Crown.
Reading Challenges: Historical Fiction

Do I like the cover?: I do, I do -- it's the author, too, which makes it even more fun! (And this time, I'm gleeful that male models suffer the same fate as female models when placed on the cover of a historical novel.)

First line: The snow lay deep over Hounslow Heath and the light was failing fast.

Buy, Borrow, or Avoid?: Borrow or buy, especially if you like Colonial US-era fiction.

Why did I get this book?: Love novels set in Colonial/Revolutionary US.

Review: I just need to get this out of my system: this book is an absolute riot. There. No more plays on the title, I swear.

This delightful, action-packed historical novel is inspired by a character from a real 18th century romantic comedy, The Rivals by Richard Sheridan. A popular hit, it was loved by both the English monarch and upstart American George Washington. Featuring a character named Jack Absolute, it's a romp of secret identities, forbidden lovers, duels, and eventual happy endings.

The author of this book played the part of Jack Absolute for six months in 1987 (it's him on the cover of this book!), a role he adored and could never shake off. The resulting fascination with that character has turned into this delightful novel.

Opening in 1777, Jack, newly possessed of a plantation on Nevis, is stopping over in England for a few weeks, leaving behind India for his new Caribbean home. No longer a captain in the British Army, Jack is stunned to find everyone in London knows his name, thanks to his bestie, playwright Richard Sheridan. Sheridan, Humphreys writes, co-opted Jack's name and romanticized an incident in Jack's past as the major plot to his popular play. When Jack starts a flirtation with an actress who has a beau, he finds himself in the midst of an illegal duel, which propels him to accept the offer from a former commanding officer General "Gentleman Johnny" Burgoyne. From there, he finds himself back in America, acting as chaperone, military attache, and spy.

Humphreys kicks off his story with dramatic panache: illicit sex in Chapter Two and a violent duel by Chapter Three. (The events establish Jack's character, but for good and bad, the cinematic fight scenes continue throughout the novel but the sexytimes dwindle to brief romantic asides.)  By page 35, I was in love.  (Just another notch for Jack, I suppose!)

The writing style is brisk, punchy, with a mix of banter-y dialogue (it's obvious Humphreys appreciates a good line!) and continuous action.  I'll be honest, when I learned the author was an actor first, I was a little bit nervous about the meat of the story, but my anxieties were for naught: Humphreys has done his research.  From dress to speech, customs, food, and gossip, the narrative was rich with detail without being too bogged down (although some of the military maneuvering made my eyes glassy, but that's just me).

Somewhere, I saw Jack described as a bit of James Fenimore Cooper's Hawkeye meets James Bond, and that's precisely the way I'd describe the character. He has a devoted, taciturn, and wryly sarcastic Iroquois sidekick (have you seen the movie The Brotherhood of the Wolf? I was reminded of that a bit, only without the mixed martial arts.) and a long string of love affairs with women he sincerely cares for.  He's a bit older, so he's left off the brashness of youth and has some of that delicious self-deprecating resignation I'm a sucker for.

In addition to just being flat out fun, I loved this novel for the real personality Humphreys imbued it with. Humphreys love for the theater comes through the characters, who are all passionate for amateur theatricals (a major source of entertainment in this time), and everyone and their mother is a playwright (Burgoyne penned at least five plays!). Novels are sentimental claptrap, according to Jack Absolute, an attitude held by many; the theater was where true emotion and story could be told.  Emulating many theatrical works, perhaps, this book even has a sort of play-within-a-play motif happening, as Jack finds himself performing 'his' role in The Rivals at one point, the other players significant actors in his real life.

I can't say how historically accurate some parts of the plot are (there's a secret society thing going on here, reminiscent of Dan Brown and National Treasure) but I enjoyed the mix of conspiracy with military espionage and adventure.  A wonderfully zippy read.  I'm grateful that there are two more Jack Absolute novels out there -- I will be reading them!

I'm thrilled to offer a copy of Jack Absolute to one lucky reader! To enter, fill out this brief form. Open to US readers only, ends 6/14. Be sure to check out my interview with C.C. Humphreys for another chance to enter!
* book reviews * giveaways book rating - liked