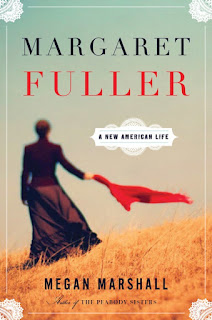 Rating: Liked a good deal.
Did I finish?: I did!
One-sentence summary: An affectionate biography of a great 19th century American thinker with heavy emphasis on Fuller's own words.

Do I like the cover?: Oh, I love it. Although I think it's kind of evocative of a pioneer / Western expansion biography rather than a fairly urbane Bostonian one, but the airy moodiness of it gets me.

First line: The archivist placed the slim volume, an ordinary composition book with mottled green covers, in a protective foam cradle on the library desk in front of me.

Buy, Borrow, or Avoid?: Borrow or buy, especially if you like partial biographies that lift the voice of the subject.

Review: Margaret Fuller is one of my patron saints and spiritual mentors. She'd make my list of famous people I'd love to have dinner with (but I have to admit I'd be quite intimidated!).

A brilliant thinker, philosopher, and writer, Fuller grew up in the heady, fiery, intellectual Boston of the early 19th century, among famed Transcendentalists, philosophers, Unitarian ministers, agitators, organizers, social scions, ex-pat Britons, and blue-blood artists. Despite being a blazing star of her time, admired by some of the most famous American thinkers today, Fuller is depressingly unknown. Here's hoping Marshall's biography is a first step in returning Fuller to her proper place of prominence in American history.

Born to schoolmaster-turned-elected official, Fuller's father was a relentless taskmaster, crafting his clever daughter into the model American son -- all the while leaving Margaret to chafe at the limitations she faced as an adult woman. Unable to become a minister, she instead found herself becoming a teacher and writer, growing into a more recognized voice in the Boston literati scene. Conflicted about romantic relationships -- her female friends almost all disappeared once they became wives -- she was torn between an appreciation for the Romantic emphasis on sensuality and the real life ramifications of such behavior. In the end, while covering the revolutionary movements in Italy in the 1840s, she found love and became a mother, writing what she considered her greatest work -- only to die tragically in a shipwreck on her return to the US.

As with Winder's brief biography of Plath which I reviewed earlier, Marshall makes no bones about her obvious affection for her subject. That admiration shines through every page, but doesn't mean Marshall is blind to Fuller's flaws; she presents a complicated woman fully, in the context of her time. A blurb on the back describes this as an 'empathetic biography', which is precisely how I found this to read. (It helped immensely that Marshall has the same feelings toward the Transcendentalist and Unitarian crowd as I do -- when she suggested Bronson Alcott was, perhaps, a 'charlatan', I literally cackled with delight!)

In her Prologue, Marshall wrote she once wanted to write a biography of Fuller "that turned away from the intrigues of her private life, that spoke of public events solely," and I admit, my heart sank. Fuller is one of the original 'the personal is political' figures for me, and I bristled at the thought that her intimate life (experiences as woman, not her sex life) would be separated from her 'public' life. Marshall quickly explained how impossible that endeavor was -- even silly -- as Fuller lived and breathed philosophy, revolution, and identity.

Marshall's style is to use Fuller's own words to tell her story, which means the narrative doesn't read quite as smoothly as some biographies but I found I grew used to the style and was sucked in. There's a slightly circuitous feel to the book at times, as Marshall gleans from letters and journals of others to fill in the places where she doesn't have Fuller's exact language, but in the end, I found this style rather breathtaking. In a way, it felt as if Fuller was dictating her biography.

Although hefty -- 496 pages -- this reads much faster and while dense at moments (the book presumes some awareness of the Transcendentalists), it is completely readable. For those who love remembering the forgotten women of history, get this book (I'd recommend April Bernard's novel Miss Fuller first, then this book, to get a lovely picture of the woman.).

I'm thrilled to offer a copy of Margaret Fuller: A New American Life to one lucky reader! To enter, fill out this brief form. Open to US/Canadian readers, ends 5/24.