- June 14, 2013
Just one week today until the Historical Novel Society Conference in St. Pete, FL!  I am so desperately excited!  (And stressed: in three days I leave for my work conference, and from there will go to this one!)

I'm thrilled to host another author and panelist, Sharman Burson Ramsey.  (You can check out the previous Q&As at the hns2013 tag.)  Ramsey is a new-to-me author, but after checking out her bio (her ancestor was a friend and neighbor of Andrew Jackson!), I'm eager to read her books.  Check out this Q&A with her to learn more about her writing, her inspirations, and who she is as a reader.  (How much do I love that she asked for, and got, Peyton Place (the book!!) and Lady Chatterley's Lover when she was 12?!)

My mother received books from the Book of the Month Club and developed quite a library. To get me started reading, she also ordered the We Were There juvenile historical fiction series and I read every one. From there I graduated to reading her books and read her entire library of novels (over 100 books!) the summer I was 12 years old. That Christmas I requested (and received) Peyton Place, Spoon River Anthology, and Lady Chatterley’s Lover. I can see the influence of each of these in the historical novels I write. I focused on British history when earning my undergraduate (University of Alabama) and graduate degrees (Troy University) in History, but the discovery of my Native American heritage through my genealogical research led to my writing about the American Southeast in the early 1800s. 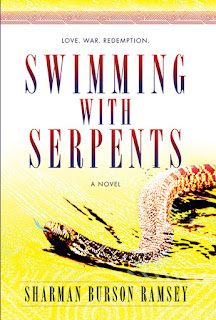 How do you find the people and topics of your books?

As I read and research I continually find topics that interest and amaze me. I want to share these discoveries with others. When I discovered the family secret of my fourth great grandmother’s Native American heritage, I researched the area and era in which she lived. The Creek Indian War actually brought my grandparents into the area at the request of Andrew Jackson. During my first visit to Fort Mims, the overgrown and neglected site of the massacre that started the war, it seemed that the voices of those who died there cried out to have that story told. That led to my first novel, Swimming with Serpents, which introduces a multicultural family that begins a family saga written from the Native American perspective. Like Paul Harvey, I wanted to tell the rest of the story which was so much more interesting than what I learned in my fourth grade Alabama history class! After writing Swimming with Serpents, I was left with the question of what happened to the Red Sticks who survived Horseshoe Bend. That led to In Pursuit. Each character has a story and gets involved in the events that I find so intriguing. I guess the influence of those We Were There juvenile novels remains with me.

Do you follow a specific writing and/or research process?

When I find a topic that interests me, I read everything I can read on the topic. I look at weather patterns of the time. I study politics, dress, and cultural oddities. I gather notes. Then I write character sketches of the characters I anticipate participating in the novel allowing them to tell me who they are. I go online and find pictures of stars I would cast as those characters and then develop a table with those pictures and the characters names so that I can glance at the character sketch “board” and be reminded I try to begin with a moment that draws the reader into their lives and then I just start writing. It will probably be rewritten several times, but at least there is a start. The chronology of historical events and the characters involvement in those events dictates the action of the novel. Love, learning and laughter will always be vital elements of my novels.

Where do you feel historical fiction is headed as a genre?

Historical fiction will always have a large readership. We hunger to know about our past and find it much more palatable when the two dimensional figures of non-fiction acquire flesh and blood through the informed imagination of a writer of historical fiction. 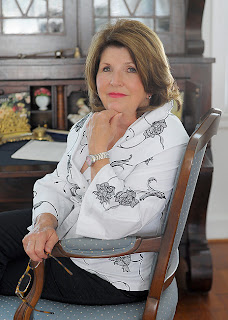 Is there an era/area that is your favorite to write about?

I write about the South, its culture, history, recipes, genealogy, homes, weddings, and gardens on my website Southern-style.com. Everything I have written about there finds a place in my novels.

How about to read?

I love to read romantic novels set in England and Scotland during any era.

Is there a writer, living or deceased, you would like to meet?

Jean Auel, Wilbur Smith, and Diana Gabaldon are three writers for whom I have great respect and would love to meet.

What book was the most fun for you to write?

Start with Waverly plantation inspired by my grandparents’ home in central Alabama, season with a multicultural cast of friends and family, add a dash of the paranormal with the ingredients of a genetic memory, toss in drug dealers and psychotic serial killers in this and a previous life while spicing it up with gentlemen friends in shades of gray and you have book one of the Partyin’ on the Plantation series: Déjà vu All Over Again, the book I had most fun writing. Alabama author and friend, Michael Morris calls it Murder She Wrote marries The YaYa Sisterhood. This novel is still looking for a publisher, but I have already begun the second in the series entitled The Homecoming.

Can you tell us about your latest publication?

When little more than a child, Joie Kincaid rescues fifteen year old aspiring journalist Godfrey Lewis Winkel from certain death after the Massacre at Fort Mims. As an adult, Godfrey, now an established authority on the pirate Captain Kidd as the result of his discovery of a map locating Kidd’s treasure, agrees to speak at the British Museum so that he might seek out Joie Kincaid in London. There the two are kidnapped by the pirate Gasparilla who is jealous of Kidd’s notoriety and seeks Kidd’s treasure. He takes them to his island lair in Charlotte Harbor and demands that Godfrey write his biography and make him as famous as Captain Kidd. Godfrey must channel Caleb Connory, the hero of a novel he plans to write, to become the bold courageous man needed now to save Joie who suffers amnesia resulting from a blow on the head.

Joie escapes Gasparilla, is befriended by Millea Francis and gets caught up with Red Sticks Peter McQueen, Josiah Francis and Savannah Jack who survived Horseshoe Bend. Godfrey manages his escape when Jackson attacks the Indian village where Godfrey has distracted Gasparilla with the promise of the treasure of William Augustus Bowles. Jackson’s pursuit of the Red Sticks triggers the First Seminole War. A desperate Godfrey enlists Jackson’s assistance in finding Joie Kincaid. Joie’s brother Gabe Kincaid joins up with former British officer George Woodbine to cross the Atlantic to rescue his sister and gets caught up in a plot fomented by former British officers Woodbine and Robert Chrystie Armbrister who are driven by broken promises to the Red Sticks and the memory of the tragedy of the Negro Fort. Joined by the well-intentioned Scottish trader Alexander Arbuthnot, they have visions of a Florida Empire.

Time is Godfrey and Gabe’s enemy. In the midst of battle at Bowlegs Town, renegade Savannah Jack captures Joie and makes her the target for his vengeance. He uses her to lure her brothers to Dog Island where he plans to finally destroy the family of his nemesis Jason Kincaid. This lusty, action packed, adventure filled historical novel titled In Pursuit published by Mercer University Press will be available in September of 2013