The Illusion of Separateness by Simon Van Booy 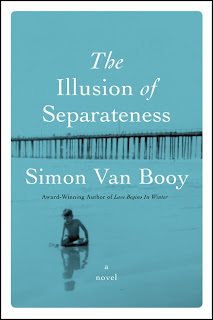 Rating: Loved, broken hearted love....
Did I finish?: I did, in one night!
One-sentence summary: Six people, seventy years, and one war that connects them.
Reading Challenges: Historical Fiction,

Do I like the cover?: Maybe? It reminds me of a Europa Edition which is fine, and it captures a sense of the novel. I think it's good it isn't a WWII-oriented cover...

First line: The mere thought of him brought comfort.

Buy, Borrow, or Avoid?: Borrow or buy if you like poetic novels, World War II stories,

Why did I get this book?: I adored Simon Van Booy's novel Everything Beautiful Began After and am a devoted fangirl now

Review: In 2011, Van Booy took my heart, crushed it, reassembled it, and gifted it to me in a wrapping of gorgeous prose in the form of Everything Beautiful Began After. Unsurprisingly, Van Booy has done it again with this book.

Van Booy is a short story writer (Everything Beautiful Began After was his first novel), and this book straddles both forms. In a series of breathtaking vignettes, Van Booy fills out a larger story arc that comes clear as we read on. Opening in 2010, the vignettes flash between then and 1939, following six people or so from the battlefields of World War II through to a convalescent home in California, New York and Manchester.

Despite the brief sketches, the characters feel real, from the first page.  There's Mr. Hugo, a German soldier who was shot in the face, living now with the horror of who he was and what he'd done.  Martin, adopted at a young age, learns later the tragic partial history of his childhood.  John, an American soldier, thought to be dead by his wife and family back in the States, scrabbles to survive after being shot down in his plane.  Amelia, his blind granddaughter, is a museum curator who pieces together a story of the war and era in such an inventive, imaginative way I wished it was a real exhibit.

The pacing of the story is gentle, easy, inviting one to linger; but there's tension, too, in understanding how everyone is connected and when -- or if -- the characters will learn the truth of their 'illusion of separateness'.

I just adore Van Booy's use of language, his turn of phrase, which is simply and poetic. Andre Dubus III blurbed his style as 'F. Scott Fitzgerald and Marguerite Duras' which is spot on -- punchy, sharp, achingly gorgeous.  (Apparently Van Booy writes fully dressed, right down to sock garters, and I swear, you can feel it in the language.)  This is the kind of book that makes me joyful as a reader; I want to dive into the sentences and just swim.

I think this would make a great book club novel for those who might want to dip their toes into more 'literary' fiction; there's some deep emotional choices that would provoke great conversation; and the familiar WWII theme is made fresh with the imaginative narrative style.  Lovers of a stunning good sentence will want this book for sure.

I'm thrilled to offer a copy of The Illusion of Separateness to one lucky reader! To enter, fill out this brief form. Open to US and Canadian readers, ends 7/5.