Chocolates for Breakfast by Pamela Moore 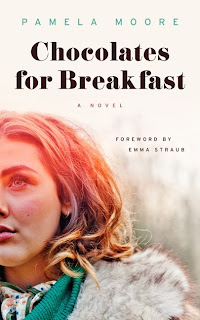 Rating: Liked.
Did I finish?: I did, very quickly.
One-sentence summary: The scandalous coming-of-age story of a 16-year old girl who has a crush on her female teacher, loses her virginity to a gay man

Do I like the cover?: I do, very much. Love the dated feel of the font and colors, the pretty figure, the retro coloring.

First line: Spring at Scaisbrooke Hall was clearly the most beautiful time of year.

Buy, Borrow, or Avoid?: Borrow or buy if you like retro/vintage fiction, coming of age stories, and seedy settings.

Why did I get this book?: I had a spell in which I was briefly enamored of Bonjour Tristesse, and the comparison of this book to it made me desperate to read this one.

Review: Written by an 18-year old girl who started at Barnard College at 16, Chocolates for Breakfast is a sad, frenetic, pensive, self-indulgent, and deliciously dramatic novel of the late 1950s, Hollywood, and that horrible transition from child to adult.

Set in 1956, the novel follows Courtney Farrell, who at 15 is pulled out of her posh Connecticut boarding school when the school notifies her parents of Courtney's depression. Courtney is nursing a sapphic crush on a school teacher (which may or may not be reciprocal) and struggles with bouts of mania and depression.

Her divorced parents are self-absorbed and unwilling to take her on (over the holiday, both parent thought the other parent had taken Courtney, which meant she had been abandoned at the school for a few days until things were worked out). Courtney is moved out the Hollywood, living with her fading actress mother Sondra, at the idyllic apartment complex where F. Scott Fitzgerald once lived. It's there, left to herself, that Courtney teaches herself to drink, smoke, and eventually, make love.

The narrative style is quick, despite the fact we're in the mind of a dreamy teenager girl. This does like a first novel, both ambitious and a bit rough, but there's lovely sentences and creative twists of language along with a scandalous story. It's worth picking up for more than just the teenaged escapades.

Although only 18 when Moore wrote this book, there is some real maturity in her reflections and meditations on growing up, responsibility, desire, the search for happiness.

As with The Bell Jar, it's hard for me to read this book without projecting what I know about the author into the story and onto the characters. Like Plath, Moore killed herself with an infant in the house and had a history with depression and suicidal behavior.

Moore was often compared to Salinger, and in some ways, I can see this being the 'female' answer to Catcher in the Rye. (Certainly, more resonated with me in this book than in Salinger's.) While 'shocking' in the day, I'm not sure this book is any more graphic or dramatic than today's YA or New Adult, although those who are uncomfortable with teenagers drinking, smoking, and 'seducing' might want to pass on this one.

While the novel was entertaining, I will say the extras captured my attention more. Novelist Emma Straub is the reason for this book's reissue: she was gifted a copy by her 7th grade French and Latin teacher, who happened to be the author's son. Straub gave her novel to her agent, which resulted it its reissue. There's also an essay by Moore's son, Kevin Kanarek, about his mother, her diaries, and her 'missing years' after the publication of this book; an article by Robert Nedelkoff on Moore and the path of this novel's publication; and a piece comparing this edition to the French edition as well as the original manuscript (which, to my delight, has more lesbian-ish-ness to it!).

For those who like vintage fiction from the '50s, get this one. Fans of Plath's The Bell Jar or other coming-of-age novels by girls worldly beyond their years will find another kindred soul here.  YA and New Adult addicts might consider picking this one up, as well: Moore is an unlikely great-aunt of the genre, I think!  This is debauched beachy fun with an undercurrent of melancholy -- so good for those moody, sunny weekends.

I'm thrilled to offer a copy of Chocolates for Breakfast to one lucky reader. To enter, fill out this brief form. Open to US/Canadian readers, ends 7/26.