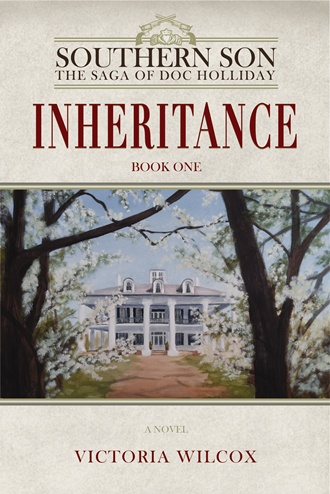 Rating: Loved!
Did I finish?: I did, finishing it in about three nights because I just couldn't stop!
One-sentence summary: The early years of John Henry 'Doc' Holliday's life, in post-Civil War Georgia, as he struggles to find his place in the world and the love of his life.
Reading Challenges: E-book, Historical Fiction

First line: John Henry Holliday believed in heroes -- he came from a long line of them, after all.

Do... I love the wonderful extras available at the author's website?: YES. An annotated photo album of places in the novel, a detailed map of pretty much every place John Henry goes, a family tree of John Henry's family (Margaret Mitchell is related to him!), as well as music from the era, a cast of characters, and reference list.

Was... I surprised to learn Margaret Mitchell was related to 'Doc' Holliday?: YES! They're some kind of cousins (her grandmother's cousin was John Henry's cousin...), but most interesting is that John Henry's beloved Mattie was the inspiration for Mitchell's Melanie in Gone With the Wind.

Am... I dying for the second book in the series?: YES. Want it now.

Why did I get this book?: I've always been horrified/fascinated by 19th century 'lawmen' and criminals of the Wild West.

Review: Until I finished this book, my only real notion of 'Doc' Holliday was of a gaunt, thin, possibly drug addicted gun fighter and cohort of Wyatt Earp. This biographical novel, the first in a trilogy, totally blew my mind and changed that whole perception.

Spanning 1862 to 1873, this book details the early life of John Henry Holliday, the only son of a commanding, unforgiving war vet and a sweet, polished Southern woman. Desperate for his father's approval, but impatient and wild-tempered enough to constantly get himself into trouble, John Henry struggles to find a place in changing, post-war Georgia.

Moderated by his pious and devoted cousin Mattie but chafing under his father's tight control and burning with the desire for his own bold, heroic life, John Henry's first serious misstep is a complicated and potentially devastating foray into revenge when a Northern politician starts stumping in Valdosta, Georgia. After his father saves him from a stint in prison or worse, John Henry finds himself in Yankee territory when he attends dental school in Philadelphia. (The practice of dentistry at this time was evolving from mere tooth extraction to the field as we know it now.)

Hoping to confirm whether or not his childhood sweetheart is indeed interested in him, John Henry returns to Georgia (after a fascinating side trip to St. Louis!), where his tensions with his father reach a crisis point and the worst happens. (Rereading this, I'm afraid I'm making it boring. Seriously, it's fascinating, and I just don't want to ruin the surprises about the boy who ends up being the infamous 'Doc' Holliday!)

Wilcox is an expert on John Henry: she's the founding director of the Holliday-Dorsey-Fife House Museum in Fayetteville, GA and did immense original research for her trilogy. It shows in the wonderfully detailed look at his life. She also managed to cram in those historical tidbits and details that make this genre my favorite: not just armchair travel, but time travel.

I'm not really familiar with Civil War Georgia or the years following the war outside of Gone With the Wind but Wilcox provides rich descriptions of the landscape, towns and cities, houses, clothes, offices and business, and trends of the day in a way that felt effortless. This book is dripping with details but not once did I face the dreaded infodump.

Speaking of the historical details and ambiance, I have to address the treatment of people of color. Historical fiction can be a tricky genre, especially when there are unsavory aspects to an era that shouldn't be whitewashed or ignored. The treatment of people of color in novels set during this time is significant and really hard to ignore, but can be incredibly hard to read as well. Wilcox doesn't ignore the racism and prejudice of the era, for which I'm grateful, but I will admit I had a challenging time with some sections and events. I think they're handled well, though, and Wilcox doesn't excuse her characters or give them an easy out.  They're products of their place and time.

I'll be honest, I never expected to love this book. Like it perhaps, but not love it, and that's because I never anticipated liking John Henry. He's a hard figure to genuinely admire and yet, by the end, I was completely taken with him. (Watch Justified? There's a long-standing 'villain', Boyd Crowder, who is pretty despicable; and yet, my wife and I are completely invested in/kind of rooting for him because he's sort of so damaged and vibrant and real. That's about how I felt toward John Henry.) I wanted to loathe him but Wilcox provides enough psychological and emotional insight so that I can't write him off as horrible. He's real and flawed and aspirational and completely stupid -- and so, so compelling to follow.

Fans of rich historical novels will want this, as well as those who like Southern family sagas. (While focused on John Henry, his massive pack of relatives means there's some interesting drama!) And anyone who enjoys a complicated 'hero' should consider spending some time with John Henry. (For those curious, the first chapter is available online for preview. The e-book is currently $5.99 from the publisher -- it clocks in at about 350 pages-- and is totally worth it, I think.)

I'm thrilled to offer a copy of Inheritance to one lucky reader! To enter, fill out this brief form. Open to US/Canadian and UK residents, ends 8/16. Be sure to check out my interview with the author on 8/7 for another chance to enter!