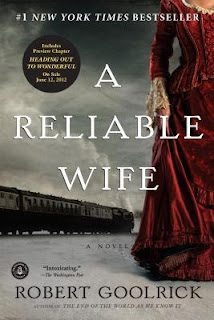 The July read for Literary Wives (more on what this is here) is Robert Goolrick's A Reliable Wife.  This one has long been on my TBR but frequently bumped down due to the seemingly resounding dislike for it.

Unlike May's read, Curtis Sittenfeld's American Wife, I fell in love with this book from the first chapter and adored it right through the grim end.

It's a kind of noir novel, with no noble hearts here, no heroes, just a twisted love story and flawed desires.  I plan to write a formal review, but in brief: set in Wisconsin in 1907, the novel follows Ralph Truitt, a wealthy, sex-obsessed businessman with a broken heart and sad family story who takes out an ad for a wife.  Catherine Land, a con artist and floozy, accepts, and reinvents herself as a staid missionary's daughter.  Catherine plans to off him, but her husband asks her to find his long-lost 'son' (there's some concern about his parentage) and bring him back.  This errand sets off, unsurprisingly, a series of events blah blah blah doom, heartbreak, conclusion! 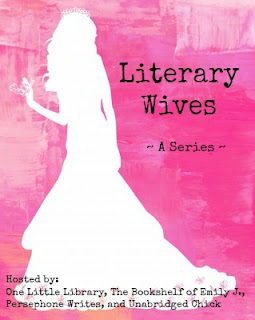 Seriously, I loved every page.  (Mostly.  Goolrick's writing was a leeeetle too, I don't know, sex heavy for me.  Not porny, but much like Sittenfeld's American Wife, the heavy use of sex to convey intimacy, lack of intimacy, violence, betrayal, etc. was a bit exhausting, and I say this as someone who doesn't mind some sex in her books.)

It's a fascinating read with our Literary Wife frame

1. What does this book say about wives or about the experience of being a wife?

2. In what way does this woman define “wife”—or in what way is she defined by “wife”?

as Catherine's marriage, her identity as wife, is both the catalyst for the horrible events that unfold and, in some ways, the thing that gives her redemption.

On Being a Wife

Our wife in this story, Catherine, responded to an ad for a 'reliable wife, compelled by practical, not romantic reasons', which precisely summed up Catherine's motivations.  (There were, of course, additional, more nefarious motivations, but she wanted a cold, practical partnership.)

Throughout the story, she behaved reliably (however duplicitous her true nature), nursing her husband after his injury and taking up his favorite authors to read to him nightly. And she capitulated, not unwillingly, to a sexual relationship with him.  She received the truth of her husband's past, his broken heart and blackened soul, and held it with an emotional gentleness one would hope our spouse would possess.

Upon being sent to St. Louis to find her husband's long lost son, a man who might not be his own, Catherine strays -- or returns to her true nature.  Embroiled in an emotionally and sexually manipulative relationship, Catherine embodied another kind of wifely loyalty to her cruel lover.  She was, to a point, going to kill for him.

I'm being a little glib, of course, and playing loose and fast with my definition of 'wife'.  Not just a legal definition (which she has, with Ralph), I think in this book, 'wife' might also denote loyalty (but not perhaps fidelity, as Catherine is not monogamous).

She very much 'betrays' the institution of marriage but then again, I'm not inclined to consider the mail order marriage to be in the spirit of the institution either.  Catherine is very much a woman committed to her partner, and the trouble comes when she finds herself split between partners and the call of her lesser self and her greater self.  (Which makes me want to spin off into a long convo about how marriage -- or at least, a lifelong emotional partnership -- can bring out the best of us.  My wife invites the best in me, and I'd like to think I do for her as well!)

Being Defined as Wife

It's interesting how a new frame, a new status, or a ritual transition can change how one sees one's self. I don't think Catherine intended to buy into any sort of romantic or pragmatic notions of wifely-ness and yet, being a wife did indeed change her.

I was greatly reminded of Fay Weldon's She May Not Leave while reading this, as a character in Weldon's novel finds his sham marriage -- meant to help someone get a visa -- convinces him he must be a husband to her, rather than remain in the long term romantic partnership he was a part of. Catherine is dedicated to her lover and her lover's wishes, yet finds herself increasingly unwilling to betray her husband. Domestic life didn't necessarily appeal to her -- she was frequently restless -- but she found a better self emerge once she became a wife. (Goolrick has everyone fall in love with everyone shockingly fast, and on one hand, lonely people might conflate sex with love, so that works, but on the other hand, I don't think he meant it that way, so I'm dubious everyone was truly 'in love' love.)

In the end, I think being a 'wife' was a definition Catherine never aspired to but found it safe, comforting, and ultimately, a source of unanticipated happiness.  I suppose we can't ask for more in a marriage! (Once more, I'm being glib.  But still.)

As a lover of dark novels like this, gothic-y, noir-y stories that articulate the horrible gray of the Midwest (I spent many of my formative years in Nebraska, South Dakota, and Utah), I resonated with this book. See what my fellow Literary Wives Angela, Ariel, and Emily have to say about this read...and tell me what you think!

We're reading The Aviator's Wife in July to discuss in August, so would love to know what you think of it if you're reading it or plan to!
Labels: literary wives