In Defense of the Queen by Michelle Diener 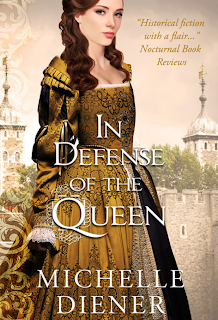 Title: In Defense of the Queen
Author: Michelle Diener

Rating: Loved.
Did I finish?: I did, in a matter of hours.
One-sentence summary: Henry VIII's painter and her fiance once more become embroiled in a dangerous plot that threatens their lives as well as that of the royal heirs.
Reading Challenges: E-book, Historical Fiction

Do I like the cover?: Eh, I don't have any strong feelings one way or the other.

First line: The houses in Lombard Street leant against each other like a crowd of drunks, propping each other up.

Buy, Borrow, or Avoid?: Borrow or buy if you like Tudor-era hist fic, unique heroines, and/or

Why did I get this book?: I loved Daughter of the Sky.

Review: I'm pretty much a die-hard Diener fan now -- she made me inhale (and love), three Tudor-era hist fics! After being blown away by Daughter of the Sky, her historical novel set in 19th century South Africa, I agreed to review this one despite my finickiness about Tudor historical novels.  I was lured by her appealing heroine, a painter at Henry VIII's court.

On a whim, I picked up the first two books in the series, In a Treacherous Court and Keeper of the King's Secrets, despite my enormous review queue, and I inhaled both by Saturday before starting this one. This one, hands down, is my favorite of the series so far, which like the other books is brisk, action-filled, slightly romantic/sexy, and intriguing.

I apologize now for the awkward review: writing something sensible about a book I'm mostly arm-waving about is hard! Plus, I'm still caught up in all three books and I really just want to shove them at everyone.

Our heroine, Susanna Horenbout, is a Belgian (Flemish) artist, sent by her father to work in Henry VIII's court. From the moment she stepped foot in the UK, her life has been filled with intrigue and danger, but she has found protection (and love) with one of Henry's low born courtiers, John Parker.

This book starts a mere few months after the end of the second book, with the arrival of Lucas, Susanna's brother, in London. While Susanna has started illuminations and portraits for Henry and his court, Lucas assumes he will take on the responsibility of his family's commission, much to Susanna's bitterness. But Lucas' arrival is not for work, she quickly learns, as he forces on her a secret letter to Queen Catherine that embroils her in unwelcome intrigue. At the same time, her betrothed's advancement at court has rankled both strong courtiers and Cardinal Wolsey, and her brother's machinations lead her to be imprisoned on charges of treason.

Both Susanna and Parker are historical figures from Henry VIII's court, although little is known about them particularly. But Susanna was a painter, and Parker was Henry's Yeoman of the Crossbows, and they really did marry. I'm completely in love with Susanna, who is a wonderfully competent heroine -- pragmatic, calm, and savvy -- and she makes the series for me. Despite the possibly over-the-top intrigue and drama, her realistic responses to the danger and excitement keep the story grounded for me.

While this book is very readable as a standalone, I think there's a huge emotional payoff by reading the first two books. They're brisk and fun and set up both Susanna and Parker's relationship, their relationship with Henry and his court, and explain why the villains in this book are so determined to get them. I believe this is a self-published sequel (the previous two novels were published by Gallery), and having read them all back-to-back, I had no idea this one wasn't traditionally published.

Tudor fans will want to get this series as well as those who want a 'lighter' historical novel that doesn't stint on historical detail or fascinating characters. (I am, needless to say, dying for another book with them!)
* book reviews book rating - loved