League of Somebodies by Samuel Sattin 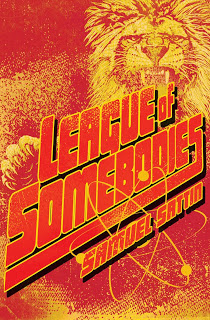 Rating: Okay.
Did I finish?: I did.
One-sentence summary: A family's obsession with raising superheroes results in damaged fathers, frightened sons, and fraught marriages.

Do I like the cover?: I love it -- bright, bombastic, kind of mesmerising -- and lions do feature in the story.

First line: As a dying man, Lenard Sikophsky would often look back upon the night when he was a child, and his father, Fearghas Murdoch Sikophsky -- the first generation of Scottish/Jewish/Polish (with a lower case 'p') emigres pilgrimming into America by briny way of the Massachusetts coast -- stuffed a sponge soaked with chloroform between his lips, wrapped a sash around his eyes, and got ready to introduce him to a concept he called manhood by way of a speeding train.

Buy, Borrow, or Avoid?: I could not say.

Why did I get this book?: I'm interested in the 'real world' origins of superheroes.

Review: I'm all over the map on this book. An over-the-top look at fathers and sons, Sattin's novel was blackly hilarious and a bit overwrought.

Stylistical, I was reminded of Michael Chabon and Gary Shteyngart (with a little visual and linguistic nods to Guy Ritchie), the novel follows Lenard Sikophsky/Lantana Zatkin, a Scottish/Jewish man from Boston whose father is convinced he needs to raise a superhero.

Lenard's great-grandfather wrote a book, The Manaton, about ascending into Manhood (which included, in his eyes, a correct cosmology of men-lions-god-everything else and open misogyny) which Lenard's father wholly embraces. There's an arch-villainous organization, THEY, who wants the Manaton, according to Lenard's father

To urge Lenard's development, his father fed him plutonium since he was a child, which physically morphed and changed him (whether into a superhero is debatable). The Manaton has little use for women, so a beautiful local Jewish girl is bartered to be Lenard's mate, but thankfully, Lenard loves her anyway (and she seems to like him). But things get more complicated when Lenard decides to follow the Manaton as he raises his own child.

At the start, watching Lenard struggle through the insanity of his father (which consisted of physical and mental abuse of varying degrees), I was there. It was campy and over-the-top, dark and funny, and very twisted. But things fell a part for me when watching Lenard attempt the same with his son. What felt vaguely possible in the 1960s seems down right abusive in 2006 and I had to remind myself more that this was a campy sort of send up. (Plus, the female characters were just, ugh.)

Sattin's writing style took some getting used to: ornate, fussy, complicated, it was as grandiose as the Sikophsky's delusions, and it made the novel for me. (Usually -- there were moments when I wondered what had happened and I was too impatient to reread once more.)

I can't say how I feel on finishing. It provoked and annoyed me the way Gary Shteyngart's Super Sad True Love Story did and for the right kind of reader -- fans of Chabon, I think -- this might be a win.
* book reviews book rating - okay