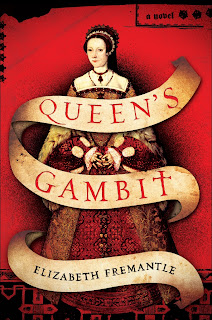 Do I like the cover?: I adore the cover -- such a unique design for a historical novel. Love the red.

First line: The notary smells of dust and ink.

Buy, Borrow, or Avoid?: Borrow or buy if you want a lesser known Tudor wife.

Why did I get this book?: Katherine Parr is one of my wife's favorite of Henry's wives, and I'm intrigued by her.

Review: This novel of Katherine Parr, the last wife of Henry VIII, was a surprising and brisk look at her marriages and romantic life, as well as the religious tumult in the court.

Katherine, widowed for a second time, has inherited a small fortune, and is known for her smart with and loving care of her recently deceased husband. When Mary, Henry VIII's daughter, summons her to the palace, Katherine becomes the focus of Henry VIII's 'romantic' attentions. Henry, stung still from the disaster of Catherine Howard, is less interested in the nubile maidens being flung his way, and instead wants Katherine. (I must admit to cringing at all those scenes -- sick, obese Henry, who dresses up as a jester so his courtiers can pretend to be surprised when he unmasks himself...!)

Katherine is no dummy nor some untried girl blinded by power and fame. She suffered cruelly when held hostage during a Catholic rebellion, and both she and her stepdaughter struggle with the dark memories and scars of that time. Reluctant to marry the King, her desire to avoid such a step is only increased when she falls for dashing courtier Thomas Seymour.

Novels of royal intrigue aren't my passion but Fremantle's heroine, canny but not ambitious, was a woman I could get behind.  Interested in theology and philosophy as well as the 'science' of healing herbs, Katherine is savvy and cool (unless Thomas Seymour is involved).  The world during this time was facing more than drama over Henry's wives, too: religious tumult and rebellion color Katherine's days and Fremantle balances well the emotional drama with political intrigue, so that neither overwhelm the story.

However, Katherine's stepdaughter, Meg, and her devoted servant, Dot, were the stars of the story for me.  Dot is smart and loyal, but illiterate; she hungers to learn to read and is aware of just how much is denied her due to her inability to read.  (I would love a novel from her viewpoint!)

I had a few small quibbles with this book, mostly stylistic.  It's written in third person omniscient, present tense, which I found distracting.  The key emotional moments of the story felt flat to me, rushed through rather than built up, so much so that I wondered if I had missed something: Katherine's falling in love with Thomas Seymour, or the shock of seeing Elizabeth, Henry VIII's daughter, with a man in her bed.  I didn't entirely 'buy' Katherine and Thomas Seymour's love affair.  It rather felt like their glances suddenly turned into hot sexytimes in the space of a few pages.

Still, despite my complaints, a solid debut, and for those who are curious about one of the less written about wives of Henry VIII, get this one.  Despite the page length, this reads very quickly -- I never would have said it was over 400 pages! -- and Fremantle includes an annotated list of who's who as well as a timeline to help the less Tudor-educated reader (me) keep everything and everyone straight.

I'm thrilled to offer a copy of Queen's Gambit to TWO lucky readers!

To enter, fill out this brief form. Open to US readers only, ends 8/30.