Where They Bury You by Steven W. Kohlhagen 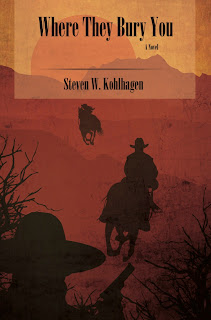 Title: Where They Bury You
Author: Steven W. Kohlhagen

Rating: Liked.
Did I finish?: I did -- raced through it!
One-sentence summary: A handful of gamblers try to make a big score in 1860s New Mexico and Arizona, at a time when the region is torn up with conflict and war.
Reading Challenges: E-book, Historical Fiction

Do I like the cover?: You know what? I do. I thought I didn't, but when I viewed the image full size, the textured background, the 'Western' font, and the silhouettes actually appeal to me.

Buy, Borrow, or Avoid?: Borrow or buy if you like Westerns, the Southwest as a setting, or want a look at a wild and tempestuous time in US history.

Why did I get this book?: I've always been a bit curious about Kit Carson and that whole world of the Wild West.

Review: While Westerns and cowboys-and-Indians stories are not genres I'm drawn to, I am interested in the history of the western US in the 19th century. I lived in South Dakota during the filming of more than one cowboys-and-Indians movie (including Dances with Wolves), which provoked conversations about how we view that time and talk about the people, decisions, and events that unfolded. As a result, when I read book set during this era, I want a more nuanced look at the circumstances and people.

Happily, I got that, and more, in this book.

I was intrigued by this novel for the historical mystery offered: in 1863, the US Marshal in Santa Fe was killed during a skirmish with the Navajo, with what would be almost a million dollars today on his person. While Kit Carson and the official record says nothing else about this incident or the money, Kohlhagen was curious about the 'real' story.

I anticipated a historical thriller with more conspiracy elements, a la Timothy O'Brien's The Lincoln Conspiracy, but this is actually a rather robust and detailed historical novel of Civil War-era New Mexico and Arizona, and the tenuous, complicated relationship between the white Americans, the various Native American tribes, and the Mexicans in the area.

I don't think I can succinctly summarize the plot, which seems rather complicated, but in Kohlhagen's hands, unfolds neatly. Covering about two years (1861 through 1863), the novel opens with a oh-god-please-don't-be-so-dumb incident (which is historical) that sets off the violent and tragic turn of events. In Arizona, a green Army officer starts a war with the Apache when he accuses their chief, Cochise, of kidnapping a rancher's child and holds Cochise's family as hostage. While that trouble boils down south, in Santa Fe, a group of gamblers fleeing their pasts (either in California or out East), come together and form a plot to get rich. The tensions in the US over the Lincoln presidency, the succession of states in the south, and the question of slavery touch New Mexico and Arizona as well.

Kohlhagen's writing was very approachable, which I appreciated, since I tend to get glazed eye over army and/or battle scenes, and he balances the big conflict (wars) with the smaller one (the con). I found I 'knew' the characters, which was quite a feat given the cast! (It didn't hurt that Kohlhagen includes a list of who's who at the start and separates the two -- thankfully -- so I didn't spend hours googling Lily Smoot, his fictional gambler mastermind.) Kohlhagen manages to avoid the info dump, although now and then there's a rare narrative hiccup that sticks out (when he introduces Kit Carson to the story, for example, he mentions Carson is 'the most famous of the early 19th Century explorers, trappers, scouts, adventurers, and Indian fighters', which is probably true, but feels odd as it doesn't fit the style Kohlhagen used up to that point.). Otherwise, I liked the writing, which was short, immediate, and punchy.

A very quick read (it has about 312 pages), this book surprised me in the best way. Great historical details and a breakneck plot, it's a great read. For those who might not be immediately drawn to this era, consider this book as an intro -- lots of drama, mood, ambiance, and a tough female heroine to keep one hooked.

I'm thrilled to offer a paperback copy of Where They Bury You to one lucky reader! To enter, fill out this brief form. Open to US readers only, ends 9/6.